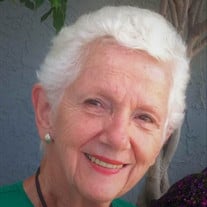 Alfreda “Freda” L. Chiaradia Linde, 93, was received by Jesus on Thursday, October 28, 2021, dying peacefully in her daughter’s home in Elgin, SC, after a long and beautiful life. Freda was born and raised on Jordan Street in Allentown, PA, and spent her married life and raised her children in Coopersburg, PA. Her beloved husband, Ted, died in 1989, they were married 35 years. Freda was the daughter of the late Alfreda Taverna Chiaradia Goldman, Angelo Chiaradia, and stepfather, Anthony Goldman. She is survived by her eight children, Theodore (Marina) of Philadelphia, PA, Peter of Fort Collins, CO, Eric (Melinda) of Dagsboro, DE, Christopher (Diane) of Asheville, NC, Jennifer Byers (Rick) of Elgin, SC, Mary of San Francisco, CA, Alyson of Elgin, SC, and Matthew (Mariska) of Emmaus, PA. Freda is also survived by her 12 grandchildren, Liana, Theodore J., Eric, Krista, Quinn, Carol, Jane L., Tea, Jane E., Cedar, Theodore D., and Henry; six great-grandchildren, Charis, Evelyn, Henley, Selah, Hazel, and Isla. In addition to her parents, she was preceded in death by her brothers, Angelo and Paul, as well as her granddaughter, Kathryn. Freda never knew a stranger and made all around her feel loved and so very special. She will be remembered for her quick wit, her love for language, her beautiful singing voice, and her heartfelt compassion for others. Her legacy lives on in all those she touched. At her request, the graveside service will be private. A celebration of her life will be held in Pennsylvania at a future date. Shives Funeral Home, Trenholm Road Chapel, is assisting the family and will announce further plans.

The family of Ms. Alfreda "Freda" L. Chiaradia Linde created this Life Tributes page to make it easy to share your memories.

Send flowers to the Linde family.