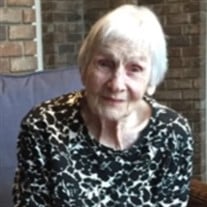 Mrs. Allen (Johnson) Burris West, 98, of Columbia, died Monday, June 22, 2020 after a fall, at a facility where she resided, resulting in a fracture and a rapid decline in her health. Born November 12, 1921, in the Town of Eau Claire, SC, she was a daughter of the late Thomas Eason and Annie Laurie Brucker Johnson. In addition to her parents, she was preceded in death by her husbands, James Warren Burris, Sr. and James Douglas West; brothers, Malcolm Johnson and Alfred Johnson; and sisters, Carmen (Johnson) Lybrand Spahn and Miriam (Johnson) Sloan. Mrs. West was raised in the Eau Claire community, where her father was both the Chief of Police, as well as the Chief of the Fire Department. She was a member of St. Peter’s Catholic Church in Columbia. Prior to her retirement, Mrs. West was the Administrative Assistant to the Deputy Commissioner of the SC Department of Mental Health. She loved her family and enjoyed large gatherings. She was able to always make people laugh and had an incredible zest for life, enjoying traveling to see friends and family and go on cruises with friends. She was an avid fisherman and enjoyed boat rides at her Lake Wateree property. Mrs. West is survived by her daughter, Elizabeth Burris Smith Narr of West Columbia; son, James Warren Burris, Jr. (Angeliena) of Blythewood; four grandchildren and seven great grandchildren. She is also survived by a host of extended family and friends. A private graveside service will be held at St. Patrick’s Catholic Cemetery. Shives Funeral Home, Trenholm Road Chapel, is assisting the family. The service will be live streamed 3 o’clock Friday, June 26th at ShivesFuneralHome.com by visiting her tribute wall, where a memorial tribute video will also be posted. In lieu of flowers, memorials may be sent to Pawmetto Lifeline, 1275 Bower Parkway, Columbia, SC 29211; Alzheimer's Association, 140 Stoneridge Dr. #210, Columbia, SC 29210 or to the charity of one’s choice.

Mrs. Allen (Johnson) Burris West, 98, of Columbia, died Monday, June 22, 2020 after a fall, at a facility where she resided, resulting in a fracture and a rapid decline in her health. Born November 12, 1921, in the Town of Eau Claire, SC, she... View Obituary & Service Information

The family of Mrs. Allen (Johnson) Burris West created this Life Tributes page to make it easy to share your memories.

Send flowers to the West family.