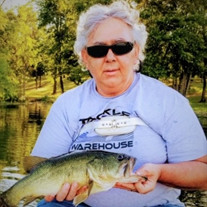 TSGT Alphonse A. Kempfer, Jr., US Air Force (Ret.), 61, of Columbia, died Saturday, September 26, 2020. Born May 10, 1959, in Columbia, he was the son of Betty Lou Hayden of Lugoff and the late Alphonse A. Kempfer, Sr. Until his retirement, TSGT Kempfer honorably served his country for more than 20 years in the US Air Force. During his military career he received many decorations and awards for his dedication. TSGT Kempfer enjoyed being outside, especially when he had the opportunity to go fishing or to the shooting range. He collected guns, coins, and antique fishing lures. TSGT Kempfer also loved music and picking on his guitar. He loved his family dearly and they will always remember him being full of humor and for his quick wit. In addition to his mother, he is survived by his wife of 39 years, Arleen Kay Kempfer; children, Rachelle Nichole “Nikki” Kempfer, Alphonse A. Kempfer, III (Brianna), and Andrew Blake Kempfer; grandson, Kenneth Nicholas Davis, as well as an expected grandchild. Surviving family also include his sisters, Sandra Ann Wilson and Joyce Marie Johnson. The family will receive friends from 5 until 7 o’clock Sunday evening October 4th at Shives Funeral Home, Trenholm Road Chapel, 7600 Trenholm Road Ext., Columbia, SC. The funeral service will be held 12:30 o’clock Monday, October 5th at the funeral home. Burial with full military honors will follow at 2 o’clock at Fort Jackson National Cemetery. Memorials may be sent to the Paget Foundation, PO Box 24432, Brooklyn, NY 11202.

The family of TSGT Alphonse A. Kempfer, Jr., US Air Force (Ret.) created this Life Tributes page to make it easy to share your memories.