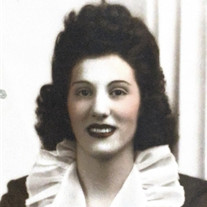 Ann Louise Royal, 99, of Columbia, passed away on Monday, November 8, 2021. Born in Sandusky, Ohio on June 30, 1922, she was the daughter of the late Patrick Anthony and Josephine Sampano Ross. Ann joined St. Joseph Catholic Church in 1976 and remained as a devoted member throughout the years. She was a graduate of Bradford Senior High School and went on to have a career as a clerk for the FBI in the late 40s. Once leaving the FBI, she took on retail at Tapp’s Department Store and eventually became a greeter for Walmart. Ms. Royal was a strong willed, independent, Italian woman who had a passion for working. Ann continued to do so until she reached 86 years of age. Ms. Royal was the loving wife of many years to Julius Reid Royal. The two met in DC and went on to marry in 1952. Ann had multiple talents, but she is most well known for her famous Italian cooking. A family favorite was Ann’s big pot of homemade spaghetti. Along with cooking, she enjoyed reading and spending time with her loved ones. Survivors include daughter, Joan Wood (William); son, Donald Royal (Caroline); grandchildren, Craig Wood, Mark Wood, Christopher Wood (Kimberly), Austin Royal (Carrie), Darby Royal, and Sarah Royal; great-grandchildren, Makayla Wood, Austin “Reid” Royal Jr., and William Wood. In addition to her husband and parents, she is preceded in death by siblings, Michael Ross, Josephine Allen, and Anthony Ross. The funeral mass for Ms. Ann Louise Royal will be held at 10 o’clock on Saturday, November 13th, at St. Joseph Catholic Church, 3512 Devine Street, Columbia, SC 29205. Rosary with visitation to follow from 6 until 8 o’clock in the evening on Friday, November 12th, at Shives Funeral Home, Trenholm Road Chapel, 7600 Trenholm Road Ext., Columbia, SC 29223. Burial to take place at Greenlawn Memorial Park, 7100 Garners Ferry Road, Columbia, SC 29209. In lieu of flowers, memorials may be made to St. Joseph Catholic Church.

Ann Louise Royal, 99, of Columbia, passed away on Monday, November 8, 2021. Born in Sandusky, Ohio on June 30, 1922, she was the daughter of the late Patrick Anthony and Josephine Sampano Ross. Ann joined St. Joseph Catholic Church in 1976... View Obituary & Service Information

The family of Mrs. Ann Louise Royal created this Life Tributes page to make it easy to share your memories.

Ann Louise Royal, 99, of Columbia, passed away on Monday, November...

Send flowers to the Royal family.