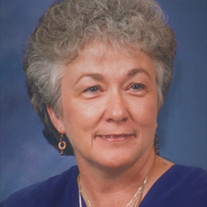 Elizabeth Anne “Anne” Steele Fletcher was a loving and caring wife, mother, grandmother, sister, aunt, and friend. She passed away peacefully at her home surrounded by family on March 4, 2021 at the age of 77. Born in Mobile, AL on November 12, 1943, she was the second child and only daughter of the late Bert Lee Steele, Sr. and Elizabeth Hatchell Steele of Mobile, AL. In addition to her parents, she was preceded in death by her beloved baby brother, Rev. Eugene Nelson Steele of Fairhope, AL. Anne grew up in the Mobile area where she graduated from Murphy High School before earning an MS in Elementary Education at William Carey College in Hattiesburg, MS. After graduation, she moved to Atlanta, GA where she taught for 3 years in the Dekalb County school system. It was in Atlanta where she met her caring and doting husband, Dan. They married in her parents’ church in Mobile in 1968 and then started their family in the eastern suburbs of Atlanta where her three children were born. In 1979, they moved to Columbia, SC and put down more permanent roots. Anne always had time for her children; helping out as Boy Scout Den mother, homeroom parent, school and church youth trip chaperone, Girl Scout Cookie Drive coordinator, and so much more. Anne was also an active member of Spring Valley Presbyterian Church where she worshipped, served, and fellowshipped for 41 years. She was a part of the Women of the Church / Presbyterian Women, Salt Shakers, Deacon & Elder Boards, church softball team (as a catcher), bowling team (a one-time 300 score bowler), and anywhere else she saw a need. As her children grew older, she formed a “girls’ group” that spent many weekends away laughing and cherishing life together. She also enjoyed traveling with Dan most often in their RV to see family in FL and NC, to spend time with her many RV association friends, or to just float down the Mississippi River on a barge. She was so very proud of her grandchildren and often shared pictures of them in her camper and home. Most importantly though, she loved others more than herself and gave of herself for as long as she could. Anne is survived by her husband, G. Dan Fletcher; brother, Bert Lee Steele, Jr.; sisters-in-law, Donna Bobo Steele, Dr. Judith Walker Steele; son, Galen D. Fletcher II; daughter-in-law, Sarah B. Fletcher; grandsons, Galen Daniel Fletcher III, William Paul Fletcher; son, James Lee Fletcher; daughter, Margrett Fletcher Winegard; son-in-law, Jason Todd Winegard; granddaughter, Elizabeth Anne Winegard, and grandson, Jason Fletcher Winegard. The family would like the extend their deep gratitude to Homestead Hospice and Home Instead Caregivers for their loving care and attention to Dan and Anne. Memorials may be sent to the Souper Bowl of Caring (tacklehunger.org) or to Spring Valley Presbyterian Church (125 Sparkleberry Lane, Columbia SC 29229) for the “Presbyterian Women in memory of Anne Fletcher.” The service will be held at Spring Valley Presbyterian Church on March 11th at 2 PM. Shives Funeral Home will provide a webcast of the service on their website (shivesfuneralhome.com) for those who cannot attend in person.

Elizabeth Anne &#8220;Anne&#8221; Steele Fletcher was a loving and caring wife, mother, grandmother, sister, aunt, and friend. She passed away peacefully at her home surrounded by family on March 4, 2021 at the age of 77. Born in Mobile,... View Obituary & Service Information

The family of Mrs. Anne Steele Fletcher created this Life Tributes page to make it easy to share your memories.

Elizabeth Anne “Anne” Steele Fletcher was a loving and caring...

Send flowers to the Fletcher family.