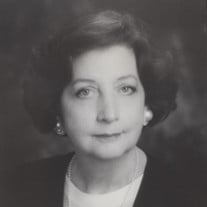 Anne Millard Robinson, loving wife, mother of four, and grandmother to five, passed away peacefully at home at the age of 89 on Thursday, September 17, 2020. Anne was born on November 22, 1930, to Maydwell and Florence Millard of Atlanta, GA. She grew up in Atlanta, attended Christ the King School, and later attended the University of Georgia. She was a member of the Kappa Alpha Theta sorority. Anne married Robert "Bob" Lindorme Robinson in June 1951 and was his devoted wife for nearly 70 years. Anne had a successful career in residential Real Estate while in Atlanta. In addition to her professional accomplishments, Anne was engaged in the community, volunteering with numerous charity and cultural enriching organizations. With a propensity to help others, she worked tirelessly for the Parent Volunteer Association at Christ the King School, the Atlanta Ballet, and served as President of the Young Matron’s Circle for Tallulah Falls School (now The Circle for Children). She was also actively involved with the Women’s League and Garden Club of Atlanta. Anne and her husband Bob moved to Columbia, SC in the late 1980’s where she earned her Broker’s license and continued her career in residential real estate. She was a member of Holy Spirit Catholic Church in Atlanta and St. Joseph’s in Columbia. Anne had a passion for music that reflected her own family’s musical background and artistry. She majored in music, focusing on the piano while at the University of Georgia, and was a talented, creative spirit. Her love of music drew her to the South Carolina Philharmonic and Symphony League in Columbia, serving as President of the League. She also played a key role in the Arthur Fraser (Young Artists) Competition. During her time in Columbia, she also served as President of the Wildewood Women’s Club. Anne was known for her kindness and compassion as well as her quick wit and keen sense of humor. She was a loving and caring wife and mother, much admired not only by friends and family but also by all who were fortunate to know her. Anne’s innate love for others was a bonding agent for family and friends. Anne will be profoundly missed and forever remembered for the extraordinarily positive and loving memories she has left with us. Anne was preceded in death by her parents, two older brothers, Maydwell and Reg, and by her sister Jean. She is survived by her husband Bob, her children Robert "Rob" Lindorme Robinson Jr., Stephen Millard Robinson, daughter Julie Ann Robinson, all of Atlanta, and Christopher Parker Robinson of Athens, and grandchildren; Wesley Raymond Robinson (Alyssa), Nicholas Parker Robinson (Sarah), Taylor Millard Robinson, Shelby Carter Robinson (Jeff), and Dillon Robinson Kelley and numerous nieces, nephews, and cousins. There will be a private family service on Thursday, September 24th with inurnment at Fort Jackson National Cemetery. Memories and condolences may be shared at ShivesFuneralHome.com.

Anne Millard Robinson, loving wife, mother of four, and grandmother to five, passed away peacefully at home at the age of 89 on Thursday, September 17, 2020. Anne was born on November 22, 1930, to Maydwell and Florence Millard of Atlanta, GA.... View Obituary & Service Information

The family of Anne Millard Robinson created this Life Tributes page to make it easy to share your memories.

Send flowers to the Robinson family.