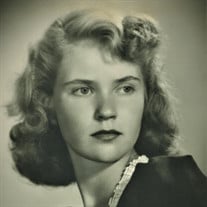 Arline Harriet Dahlman, 94 of Katonah, New York died Wednesday, October 14, 2020. Born in Boston, Massachusetts, she was the daughter of the late Arvid Emanual and Olga Pauline Synowiez Dahlman and married to the late Ralph W. Bugli. Growing up in Larchmont NY, Arline became the first female president of the Student Council at Mamaroneck High School for the school year 1942-1943. Arline began her modeling career in 1941 as a story illustrations model before moving into photographer modeling. In the summer of 1942, at the age of seventeen, she became one of the most sought after of the famous Conover girls. She graced the covers and pages of Charm, Ladies Home Journal, Liberty, Look, Redbook, The Family Circle, Life, Mademoiselle, Montgomery Ward and Sears Roebuck fashion catalogs and among many other national circulated publications. After her modeling career and becoming a homemaker, Arline began a 30-year career in Real Estate graduating from the Realtors Institute of New York State on December 4, 1975. She began her career with the Bixler’s Bedford Village Office followed by many years at Houlihan Lawrence. In 1992, she became Office Manager of Randolph Properties in Katonah until her retirement in 2005. During her real estate career she was a member of the Westchester/Putman Multiple Listing Service’s Million Dollar Club, Two Million Dollar Club, was elected to the John T. Nothnagle Round Table as a Master Sales Counselor and a member of the Katonah Rotary Club. Being a longtime resident of Bedford Hills, Arline cherished the many friends made through her years there. She loved both the visual and performing arts, was a prodigious reader throughout her life, and enjoyed challenging conversations in politics and current events. Arline was also a member of the Bedford Hills Woman’s Club. In addition to her parents and husband she was preceded in death by her son Frederick Farrel; daughter, June Farrel Moreau; sisters, Janis D. Petta and Olga Rosalie D. Aulepp. Interment will be at Ferncliff Cemetery in Hartsdale, New York. Memorials can be given to organizations and charities of one’s choice.

The family of Arline Harriet Dahlman created this Life Tributes page to make it easy to share your memories.

Send flowers to the Dahlman family.