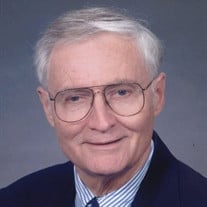 Armand Morris Opitz passed from this life to meet his Lord on November 21, 2020. Armand was born in Baltimore, Maryland on September 8, 1935, as the only child of the late Jenny Irene Fischer Opitz and Frank Morris Opitz. Armand attended Baltimore Polytechnic Institute for high school. He studied at John Hopkins University and while there earned his G.E.D. He earned a Bachelor of Arts in Political Science (1958), Masters in Arts in Teaching (1959), and Advanced Study in Education (1962) from Johns Hopkins. Armand also completed doctoral courses at the University of Florida, during which time he met Dr. Charles King, who would become his life-long friend. During Armand’s freshman year of college his mother died while his father, an engineer, was working in Bogota, Colombia. His aunt Lillian Helms, his mother’s sister, and her husband Ted, became like second parents to him. In 1957, he met the love of his life, Margaret “Peggy” Gault, at a church dance. They were married in 1958 and remained so for 62 years. They had three daughters, born within four years and known as the three “J’s”: Jane, June, and Jennifer. Armand always said that his greatest accomplishment was his family. Armand’s life-long belief in and support of education started at home with his wife and three daughters each earning advanced degrees. Armand moved his family in 1965 to Whiteville, NC so he could serve as Dean of Student Development for Dr. King at the newly established Southeastern Community College. In 1968, he followed Dr. King to Richlands, VA to start Southwest Virginia Community College (SVCC). Armand served as Dean of Student Development Services for 24 years, retiring in 1992. Armand loved his role at SVCC and considered his mentoring students and his staff one of his great accomplishments. Armand moved to Laurinburg, NC in 1992 with Peggy when she became Administrator of the newly-created Department of Nursing at the University of North Carolina-Pembroke. Never one to be idle, from 1994-2002 Armand served UNC-Pembroke as the Research and Training Coordinator and Assistant Director of Sponsored Research and Programs. In 2010, after retiring, Armand and Peggy relocated to the Myrtle Beach area. Armand lived a life of community involvement and service to others including: helping start a Savings and Loan in Richlands; serving on the Cedar Bluff Town Council; publishing a newspaper column, Career Trends, in the Richlands News-Press for over 30 years; serving as a member and Chairman of the Tazewell County (VA) Planning Commission; and serving as an Advisory Board Member for the Brushy Fork Institute at Berea College, Berea, Kentucky. He was a member of the Richlands Rotary Club, serving as President from 1971-72 and the Kiwanis Club, while living in Laurinburg. Armand also authored articles in professional journals and served for 20 years by consulting for and as a member of the Southern Association of Colleges and Schools regional accreditation teams. Armand’s faith was very important to him and he lived his beliefs as an example to all. Armand’s steadfast faith was nurtured by Gethsemane Baptist Church in Richlands. He was a member of Seaside United Methodist Church at the time of his death. Over time he served as a Sunday School teacher, a Stephen Minister, and as an Emmaus group member. Armand was an intellect and well read. He tried to connect with people where they were and shared his wisdom to assist them. He was known for sharing articles of interest to help family and friends. He is survived by his wife Peggy, and his daughters: Jane (Frank) Shuler of Columbia, SC; June (Than) Satterfield, of Anderson, SC; and Jennifer (David) Dunshee, of Fort Scott, Kansas. He is survived by three grandchildren: USA Capt. Franklin (Gabby) Shuler, III, of Honolulu, HI; Heather (Matt) Thompson, of Reno, NV; and Zachary (Kara) Satterfield, of Mooresville, NC; and two great-children: Vivian Satterfield and Alexander Thompson. Memorials may be made to the SVCC Foundation, AM Opitz Bookship, Attn. Susan R. Lowe, Executive Director, SVCC Educational Foundation, Inc. P. O. Box SVCC, Richlands, VA 24641. The AM Opitz Bookship was established in honor of Armand’s retirement from SVCC. It recognizes two female students each quarter who had completed at least one semester of college and who might not otherwise have the means to purchase textbooks. A private interment in the columbarium and service at Seaside United Methodist Church will be held at a later date for the immediate family. Due to Covid-19 concerns, no visitation will be held.

Armand Morris Opitz passed from this life to meet his Lord on November 21, 2020. Armand was born in Baltimore, Maryland on September 8, 1935, as the only child of the late Jenny Irene Fischer Opitz and Frank Morris Opitz. Armand attended... View Obituary & Service Information

The family of Mr. Armand Morris Opitz created this Life Tributes page to make it easy to share your memories.

Armand Morris Opitz passed from this life to meet his Lord on...

Send flowers to the Opitz family.