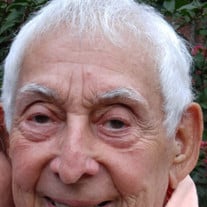 Arnold Reichenthal, 92, of Columbia, South Carolina died Wednesday, August 5, 2020. Born in Brooklyn, New York in 1927, he was a son of the late Hyman and Lena Sternberg Reichenthal and married to his loving wife Isa Reichenthal for 52 years. Arnie was known for always having a funny story or joke whether you were friends or a total stranger. He was honored this past January at Fort Jackson for his service in the Navy during World War II and the Korean War. https://www.abccolumbia.com/2020/01/31/fort-jackson-exchange-honors-92-year-old-veteran-who-served-in-wwii-korea/ He worked for 36 years in the New York City Schools as a guidance counselor, helping make school and home life better for countless disadvantaged kids. During summers he worked as a U.S. Customs Inspector and loved “kibbitzing” with passengers returning to the U.S. He believed the U.S. Customs Inspector hat entitled him to diplomatic immunity and would display it on the dashboard of his car so he wouldn’t get parking tickets. His favorite hobby was fishing in the ocean and he would love to tell the story of the time he caught a sailfish, whether or not you had heard that story before. He was devoted to his faith, putting on tefillin every morning, keeping a kosher home, and being an active member of his shul and Jewish community throughout his life. He loved his wife Isa, who he called his “B’shert” (soulmate). His three grandchildren were the apple of Zaydie’s eye, and he loved spending time with them to the end. Above all, he was a loving family member and friend, who gave so much of himself to others and shared his time, attention, help, advice, sense of humor, and love with everyone around him. At the end of his 92-year-long life, he said that he was satisfied. In addition to his wife, survivors include his son, Ian Reichenthal (Amy Zarin); daughter, Eveda Matzner (Daniel); grandchildren, Hallie Matzner, Serena Zarin, and Chloe Matzner. He was preceded in death by his parents; his brother, Sidney Reichenthal; and sister, Helen Rich. Memories and condolences may be shared at ShivesFuneralHome.com. In lieu of flowers, contributions to any of the following are appreciated: Heart of Hospice Foundation, 134 Columbus Street, Charleston SC 29403, Beth Shalom Synagogue, 5827 N. Trenholm Road, Columbia SC 29206 or Chabad of South Carolina, 2509 Decker Blvd., Columbia SC 29206. .

Arnold Reichenthal, 92, of Columbia, South Carolina died Wednesday, August 5, 2020. Born in Brooklyn, New York in 1927, he was a son of the late Hyman and Lena Sternberg Reichenthal and married to his loving wife Isa Reichenthal for 52 years.... View Obituary & Service Information

The family of Arnold Reichenthal created this Life Tributes page to make it easy to share your memories.

Send flowers to the Reichenthal family.