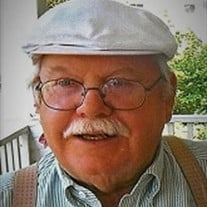 Barry L. O’Dell, 82, of Union, SC, died Saturday morning after a short illness. He was the husband of the late Nancy Crocker O’Dell and the son of the late Howard E. and Dorothy Vanderford O’Dell. He is survived by his children Darlene O’Dell and Janine Lehane, Kimberly Winslow and husband Bill, Nancy O’Dell-Keim and husband Scott; by grandchildren Elizabeth Fleming and husband Dennis, Jake and Bryce Keim, and Alexander Winslow; by his siblings Reece O’Dell, Dottie Mowbray and husband Johnny, and Mike O’Dell; and by many nephews and nieces. Barry loved his life—his friends and family, his music, the sports that he played and watched. He loved swinging on his front porch with Fats Domino, Patsy Cline, or the Platters playing through the front windows. And he loved the people who would stop by and talk with him or play a game of backgammon. As one of his friends said, “Barry always had a good story.” Though he wasn’t an enthusiastic observer of most holidays, he thoroughly enjoyed Valentine’s Day. His daughters remember him choosing boxes of chocolate for each of them, sometimes accompanied by a poem he’d written that normally began with “Roses are red. . . .” He was, in fact, a lover of poetry. During Sunday lunches when his daughters were young, he would occasionally pull out a beaten-up literature book and read from the old poets. Thomas Gray’s “Elegy Written in a Country Churchyard” was a favorite, and his accent would change when he spoke the words, “Perhaps in this neglected spot is laid/Some heart once pregnant with celestial fire.” He played sports for most of his life, though he was known for doctoring the rules every now and then. His daughter recalls a time when he took her to play golf. He gave each of them extra strokes that didn’t count towards their score: three mulligans, three throws of the ball, three kicks, and three rolls. As a teenager in the 1950s, he taught himself tennis on the old courts at Foster Park and passed the love of the sport to all his children and grandchildren, three of whom played collegiately. He worked his way through college, graduating from Clemson University in the early 1960s. His time there began his love affair with the school. For most of his career, he was employed in textile management but became a prison guard a few years before retirement after many of the textile jobs had moved overseas. He adored the people he worked with and would come home after a long day and tell his family funny stories his co-workers had shared with him. He taught his children that talent, intelligence, and skill were just as likely to be found holding a mop or standing behind a prison wall as they were sitting behind a desk. Barry was an elder in the Presbyterian Church (U.S.A.) and served as a treasurer in the First Presbyterian Church in Union. The family is extremely grateful for those who cared for him in the final years of his life, including Markitta Johnson and those serving with such compassion in MSA Hospice. Memorials may be made to Neighbor Helping Neighbor, c/o David Turner, 154 Santuc Drive, Union, SC, 29379. A joint memorial service for Barry and Nancy O’Dell will be held in the future. Shives Funeral Home, Trenholm Road Chapel, is assisting the family and will announce further plans.

Barry L. O&#8217;Dell, 82, of Union, SC, died Saturday morning after a short illness. He was the husband of the late Nancy Crocker O&#8217;Dell and the son of the late Howard E. and Dorothy Vanderford O&#8217;Dell. He is survived by his children... View Obituary & Service Information

The family of Mr. Barry L. O'Dell created this Life Tributes page to make it easy to share your memories.

Send flowers to the O'Dell family.