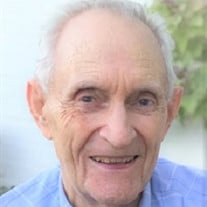 Benjamin Franklin Thomas, 101, of Columbia, South Carolina, passed away peacefully on Sunday, November 21, 2021. He was preceded in death by his beloved wife, Dorthea Elizabeth McKee Thomas; as well as his son, Edwin L. Thomas. Mr. Thomas is survived by his son, Benjamin F. Thomas, Jr. (Jane); daughter-in-law, Linda Thomas; daughters, Mae Ruth Thomas and Elizabeth A. Pearson (William); as well as 7 grandchildren and 13 great grandchildren. He was a WWII veteran who honorably served his country as an airplane mechanic in the Army Air Corps in Africa and Italy. When he returned to the United States, he obtained his PhD in Education. Mr. Thomas was employed as a teacher and administrator in the university environment, retiring in 1983 as the Dean of the School of Business at Ferris State University in Big Rapids, Michigan. He and his wife retired to Northport, Michigan, where they were active in Trinity United Church of Christ, Lions Club International, and other community activities. Mr. Thomas moved to Columbia, South Carolina in 2005 and became an avid University of South Carolina Gamecocks fan. He will be missed, but he is now with his much-loved Thea! The memorial service for Mr. Thomas will be held at a future date in Michigan directed by Reynolds-Jonkhoff Funeral Home and Cremation Services, 305 6th Street, Traverse City, MI 49684. Shives Funeral Home, Trenholm Road Chapel, 7600 Trenholm Road Ext., Columbia, SC is assisting the family locally. In lieu of flowers, donations may be made to the Trinity United Church of Christ, 103 N Warren St., Northport, MI 49670.

The family of Mr. Benjamin Franklin Thomas created this Life Tributes page to make it easy to share your memories.

Send flowers to the Thomas family.