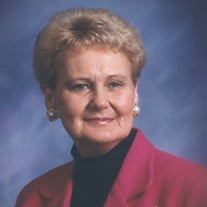 Betty Louise Beam was born August 13, 1936, in Shelby, NC and was the youngest of nine children born to Thomas Mills Curry and May Edith Mills Curry. Betty and her husband, Charles S. Beam, were high school sweethearts and their first date was to a small county fair right after Charles got his driver’s license. After Charles joined the US Air Force and spent six months at Camp Pendleton, he returned to Shelby, NC and married Betty on the first day of Spring before being deployed to Germany. That was the beginning of a beautiful 67-year marriage which produced two children, Chuck (Debbie) and Cindi (Malcolm). Betty was a loving and nurturing mother, always putting her children first in life. After traveling for 20 years in the US Air Force, Betty and Charles settled in Columbia. She was employed for Richland School District 2, first as a bookkeeper at E. L. Wright Middle School and then as an executive secretary to the associate superintendent for finance and operations at the district office. Betty assisted in administering, supervising, training, and evaluating all logistical programs of the district, namely: payroll, accounts receivable, accounts payable, money investments, school food services, pupil transportation, custodial and maintenance services, plant planning and construction services. She and Charles joined Northeast Presbyterian Church and she was a faithful member of the Good News Sunday School Class for many years. Betty also served on the church long range planning team. Betty and Charles enjoyed their later years traveling both domestically and internationally. She was the perfect wife and mother, grandmother, and great grandmother, and will be greatly missed by her entire family. She was also survived by her grandchildren, Chris Beam (Amanda), Abbey Beam, Katie Miller; great grandchildren, Mason, Madelyn, and Amelia; as well as her brother, Tom Curry of Shelby, NC. In addition to her parents, she was preceded in death by seven siblings. The funeral service for Mrs. Beam will be held 12:30 o'clock Tuesday, July 28th at Shives Funeral Home, Trenholm Road Chapel, 7600 Trenholm Road Ext., Columbia, SC. The family will briefly visit with friends following the funeral service. Burial with will be held 2 o'clock at Ft. Jackson National Cemetery. For those unable to attend, a livestream will be available 12:30 o'clock Tuesday, July 28th by visiting https://www.shivesfuneralhome.com/current-webcast/ In lieu of flowers, memorials may be sent to Northeast Presbyterian Church, 601 Polo Road, Columbia, SC 29223.

Betty Louise Beam was born August 13, 1936, in Shelby, NC and was the youngest of nine children born to Thomas Mills Curry and May Edith Mills Curry. Betty and her husband, Charles S. Beam, were high school sweethearts and their first date... View Obituary & Service Information

The family of Betty Louise Beam created this Life Tributes page to make it easy to share your memories.

Send flowers to the Beam family.