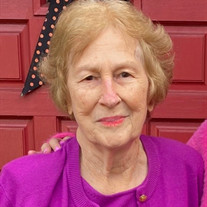 Betty Jean Hall Jacobs, 85, of Pontiac, SC, went to be with her Lord and Savior on Monday, November 1, 2021. Born in the Lewis Turnout community of Chester County, SC, on November 7, 1935, she was the youngest of six children of the late Neely Ross Hall, Sr. and Mamie Weaver Hall. Mrs. Jacobs was a beautiful and kindhearted soul who exemplified the traits of an elegant Southern lady. She graduated from Lewisville High School in Richburg, SC, and worked as a secretary in Chester, SC, until she married her beloved, deceased husband, Rhett Jacobs. The couple was married almost 50 years before his death in 2013. After marriage, she moved to Pontiac where she worked as a secretary until she became a mother and homemaker. She was a loving and devoted wife, mother and grandmother. She was an active member of North Trenholm Baptist Church for many years. At the church, she served as secretary for the children’s program as well as other committees that were associated with food as she was a great cook and it was her gift that she used to serve others. Mrs. Jacobs cherished the friendships she made through her church as well as those in the Pontiac community. Survivors include her daughter, Karen Sprayberry (Alan); son, Barry Jacobs; grandchildren, Isabelle and Olivia Sprayberry; and numerous nieces, nephews and cousins. In addition to her parents and husband, Mrs. Jacobs was preceded in death by her two brothers and three sisters. The funeral service for Mrs. Jacobs will be held at 3 o’clock on Sunday, November 7th, at North Trenholm Baptist Church, 6515 N Trenholm Rd., Columbia, SC 29206, with the Rev. Joe Copeland and the Rev. David Knapp officiating. Burial will follow the service in Spears Creek Baptist Church Cemetery. Prior to the service, the family will receive friends in the Chapel at North Trenholm Baptist Church. Shives Funeral Home, Trenholm Road Chapel, is assisting the family. Memorials may be made to Uriel Presbyterian Church Cemetery Fund, 1578 Stringfellow Road, Chester, SC 29706-7476 or to Spears Creek Baptist Church Cemetery Fund, 116 Spears Creek Church Ln., Elgin, SC 29045.

Betty Jean Hall Jacobs, 85, of Pontiac, SC, went to be with her Lord and Savior on Monday, November 1, 2021. Born in the Lewis Turnout community of Chester County, SC, on November 7, 1935, she was the youngest of six children of the late Neely... View Obituary & Service Information

The family of Mrs. Betty Jean Hall Jacobs created this Life Tributes page to make it easy to share your memories.

Send flowers to the Jacobs family.