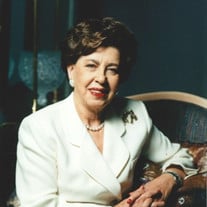 Bluma Tishgarten Goldberg, of Columbia, SC, passed away peacefully on January 21, 2021. Born in Pinczow, Poland on June 10, 1926, Bluma was the 4th of 6 children of the late Haskell and Rachel Tishgarten. Bluma was just 13 years old in September, 1939, when the Germans arrived in Pinczow, at the beginning of World War II. Bluma’s mother gave her and her sister, Cela all of the family’s money, and told them to run to the woods and hide. After living in the woods for several months, the girls were eventually captured by the Germans, and taken to work camps. Eventually, the sisters were placed in Bergen Belson, a concentration camp, and then later liberated from Kaufering VI, a subcamp of Dachau concentration camp. Bluma met her husband, Felix Goldberg, at an American displaced persons camp in Germany in 1945. Soon after, they were married, Henry, their first child was born in 1948. Bluma and Felix joined Blumas’ sister, Cela and David Miller in Columbia, SC in 1949. Bluma and Felix were able to make this journey through the efforts of the Hebrew Immigrants Aid Society, and the Columbia Jewish Community. In May, 1955, Bluma and Felix were granted citizenship of the US. This was one of the happiest days of their lives. Their second son, Karl was born in 1953, and a daughter Esther was born in 1957. Bluma and Felix opened The Tile Center in 1957, which is still family operated today. Bluma was an active member of her community throughout her years. She was awarded The New Life award by Israel bonds in 1995, Women of Distinction by Girl Scouts in 2009, Order of the Palmetto by Governor Nikki Haley in 2013, and Americanism Medal from Daughters of the Revolution in 2013. Bluma will always be remembered for her grace, beauty, gentle nature , and her loving way. Survivors include Bluma’s children, Henry (Gloria) Goldberg, of Columbia SC, Karl (Margo) Goldberg, of Columbia SC, Esther (Ira) Goldberg Greenberg, of Columbia SC; seven grandchildren, Jason (Samantha) Goldberg, Adam (Toni) Goldberg, Philip (Maple) Goldberg, Robin (Brian) Roth, Leah (Richard) Davis, Rachel (Brigid) Greenberg, Samuel Greenberg; five great-grandchildren, Harry and Felix Goldberg, Jack Goldberg, Ethan and Dylan Davis. Bluma was predeceased by her sisters, Genya Tishgarten, Cela Miller, Sala Tishgarten, Yente Tishgarten; her brother, Kalma Tishgarten; and her husband, Felix Goldberg. More details on Blumas life can be found on the website storiesofsurvival.org. The graveside service for Mrs. Goldberg will be held at 11 o’clock, Friday, January 22, 2021, at Beth Shalom Arcadia Lakes Cemetery, 1401 Arcadia Lakes, Columbia. Friends and family are encouraged to attend virtually by visiting the livestream of the service on her tribute page at ShivesFuneralHome.com. Shives Funeral Home, Trenholm Road Chapel, is assisting the family. Donations may be made to Beth Shalom Synagogue, Chabad Lubavitch of SC; or to Columbia Holocaust Education Commission An online tribute to Bluma's life has been created and may be seen by visiting https://www.flipsnack.com/blumatg/legacy-of-a-matriarch.html

Bluma Tishgarten Goldberg, of Columbia, SC, passed away peacefully on January 21, 2021. Born in Pinczow, Poland on June 10, 1926, Bluma was the 4th of 6 children of the late Haskell and Rachel Tishgarten. Bluma was just 13 years old in September,... View Obituary & Service Information

The family of Mrs. Bluma Goldberg created this Life Tributes page to make it easy to share your memories.