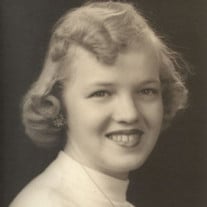 Mrs. Bobbie Jean Younginer Finley, 88, formerly of Columbia and Edisto Island, passed away in Aiken, SC on Tuesday, March 15, 2022. Born in Columbia, SC, on October 13, 1933, she was the daughter of the late Glenn Hood Younginer and Ruth Younginer Sheely. Her parents gave her the name Bobbie Jean in honor of the doctor and nurse who delivered her. She was a long time, dedicated, member of Ebenezer Lutheran Church. Bobbie was the loving wife to Mr. John Finley and was happily married for 45 years. The two met on a blind date that was set up by relatives. She was a loving, kind soul, that tried to always see the best in everyone. She was adventurous, quick to laugh, and adored animals. Bobbie had a love for fishing, cooking, watching Jeopardy, and The Price is Right. Bobbie attended high school at St. Joseph’s Academy and graduated from the University of Florida. Once out of college, she pursued a career in banking. Bobbie spent 16 years working for Atlantic National Bank in Jacksonville, Florida. After moving back to Columbia, she worked at First National Bank until retirement. In her free time, Bobbie enjoyed reading and crocheting. She donated hundreds of handmade baby hats to the MUSC Neonatal Intensive Care Unit, and lap throws to residents in local nursing homes. She had a servant’s heart and cared deeply for others. Survivors include her son, Harold G. Finley; daughters, Susan F. Simons (Andy) and Cynthia Finley; grandchildren, Scott Finley, Chad Finley (Jeri), Laura S. Blackmon (Kevin), and Allison S. Wise (Russell); cousin, Dottie Crutchfield; dear friend, Rinthia Tyre; and many loving great-grandchildren. In addition to her husband and parents, she is preceded in death by brother, George F. Younginer; maternal grandparents, John and Eunice Plate Spurlin; and paternal grandparents, Milton Glenn and Josephine Hood Younginer. In lieu of flowers, memorials may be made to MUSC Neonatal Intensive Care Unit, 165 Ashley Ave, Charleston, SC 29425. The memorial service for Mrs. Finley will be held at 11:30 o'clock, on Saturday, March 19th, at Shives Funeral Home, Trenholm Road Chapel, 7600 Trenholm Road Ext., Columbia, SC 29226. Family will receive friends prior to the service beginning at 11 o’clock, at the funeral home.

Mrs. Bobbie Jean Younginer Finley, 88, formerly of Columbia and Edisto Island, passed away in Aiken, SC on Tuesday, March 15, 2022. Born in Columbia, SC, on October 13, 1933, she was the daughter of the late Glenn Hood Younginer and Ruth Younginer... View Obituary & Service Information

The family of Mrs. Bobbie Younginer Finley created this Life Tributes page to make it easy to share your memories.

Send flowers to the Finley family.