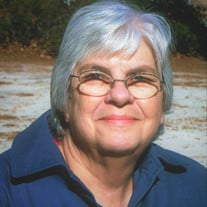 Brenda Joyce Kendall Cribb, 79, of Columbia, died Monday, October 12, 2020. Born March 24, 1941, in Columbia, she was a daughter of the late William Othell Kendall, Sr. and Flonnie Rebecca Jordan Kendall. In addition to her parents, she was preceded in death by her brothers, Joseph D. and Kenneth I. Kendall. Mrs. Cribb was raised in the mill village in Camden, SC. While living in Columbia, she met the love of her life, Chief Isaac Levern Cribb, US Navy (Ret.). The childhood sweethearts would later marry, raise four children, and have the unique opportunity to live in many areas along the east coast of the United States while he served in the US Navy. Mrs. Cribb’s life revolved around her family. She deeply cherished every moment she spent with her husband, children, and grandchildren. Mrs. Cribb dedicated her life to teaching and instilling the values of love, respect, and hard work to her family. Survivors include her children, Bud Cribb of Charleston, SC, Pennie Cribb Khan of Mansfield, TX, Pamela Anne Cribb of Columbia, SC, and Brian Cribb (Cara) of Windsor, ME; grandchildren, Chelsie Cribb, Ayesha Khan, and Sam Khan; brother, William O. Kendell, Jr. (Judy); honorary son, Ghyas Khan of Arlington, TX; as well as numerous nieces, nephews, and extended family. The family will receive friends from 5 until 7 o’clock Thursday, October 15th, at Shives Funeral Home, Trenholm Road Chapel, 7600 Trenholm Road Ext., Columbia, SC. A funeral service will be held 11 o’clock Friday at the funeral home with Rev. James A. Goudelock officiating. Burial will be held at 9 o’clock Monday, October 19th at Ft. Jackson National Cemetery, 4170 Percival Road, Columbia, SC. Everyone is invited to attend but will be asked to abide by the state’s recommendations of wearing masks and social distancing to provide a safe environment for all. A livestream of Mrs. Cribb’s funeral service will be available by visiting https://www.shivesfuneralhome.com/current-webcast/. In lieu of flowers, memorials may be sent to St. Jude Children’s Research Hospital, 501 St. Jude Place Memphis, TN 38105. Memories and condolences may be shared at ShivesFuneralHome.com.

Brenda Joyce Kendall Cribb, 79, of Columbia, died Monday, October 12, 2020. Born March 24, 1941, in Columbia, she was a daughter of the late William Othell Kendall, Sr. and Flonnie Rebecca Jordan Kendall. In addition to her parents, she was... View Obituary & Service Information

The family of Mrs. Brenda Joyce Cribb created this Life Tributes page to make it easy to share your memories.

Send flowers to the Cribb family.