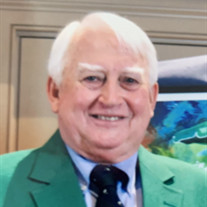 On Thursday, March 25th, Dr. Carey Alexander Washington, beloved father, and husband, passed away at the age of 80, another victim of covid. Carey was born on November 11, 1940 in Greenville, SC. He graduated from Newberry College, Virginia Commonwealth University and the University of South Carolina where he received his doctorate. He also did post-doctorate work at the Alfred Adler Institute. He was chief psychologist at the Columbia Area Mental Health Center before going into private practice. Dr. Washington was also a vocational expert witness for the Social Security Administration. He married Lynn Hawthorne in 1968 and they lived in Columbia where they raised their two children, Tanya and Alex. Although his profession was psychology, his real passion was what we called his second job – a tennis official. Carey became involved when Alex played junior tennis and went on to contribute on the local, state, national and internationals levels. His warm, outgoing and caring personality made him a hit on the court. Above all, he knew the rules and wanted them enforced fairly. This second career began in 1988 and led him to work statewide tournaments and take state leadership roles. He was a member of the USTA South Carolina Officials Committee for 15 years and chairman for 6 years. Carey was also chairman of USTA Southern Officials Committee. He received numerous awards, including the South Carolina and Southern Tennis Official of the Year. He worked major collegiate tournaments, as well as professional ones like the US Open. His work at this level led him to serve on the USTA National Official’s Committee. Another part of his love of tennis centered around Special Olympics. He began on the state level, but soon moved to the Special Olympic World games in the USA, Ireland, China and Greece. He loved working with these tennis players to give them a positive, fun experience on the court. The highlight in his tennis career was his induction in the South Carolina Tennis Hall of Fame. Carey was larger than life personality. He always had time for everyone from people at the dry cleaner to CVS. He kept Hallmark in business sending out cards to family and friends for birthdays and every other event imaginable. What we will all remember about him is his stories. If you saw a crowd, it was because Carey was telling one of his famous tales. People always wanted to sit at his table for the entertainment. He will be missed, but always remembered by his family. Carey loved to travel with his family and spend a summer week at Hilton Head. For Alex, Dad was known as “DocMan” who arrived with him at each junior tournament in “The Car”. He could not be prouder of his girls. When Tanya’s “Daddy Rabbit” visited her in NYC they would hit Broadway and take in a show night after night. But his greatest joy was his grandchildren, and being their “Papa”. He treasured them more than life. Carey was preceded in death by his father, Jamie, and his mother, Martha. He is survived by his wife, Lynn, his children, Tanya and Alex, and grandchildren, Lane, Alexander, John and Izzy, as well as his brother, Everett and nephew, Jamie. A private funeral service will be held on Tuesday, March 30th at Shives Funeral Home, Trenholm Road Chapel. The family invites you to attend virtually on or after 2 o’clock, Tuesday, by visiting his tribute page at ShivesFuneralHome.com. A celebration of Carey’s life will be held in the summer when we can gather. In lieu of flowers, donations can be made to the South Carolina Patrons Foundation that provides scholarships and grants to junior players and programs focusing on youth. Checks can be sent to SCTPF at PO Box 843, Belton, SC 29627 or the Special Populations Unified Doubles (SPUD) tournament at the Belton Tennis Association, PO Box 274, Belton, SC 29627. The family would like to sincerely thank their Critical Care Unit Nurse, Kailee; as well as all of the other loving and compassionate doctors, nurses and staff at Prisma Health Richland.

On Thursday, March 25th, Dr. Carey Alexander Washington, beloved father, and husband, passed away at the age of 80, another victim of covid. Carey was born on November 11, 1940 in Greenville, SC. He graduated from Newberry College, Virginia... View Obituary & Service Information

The family of Dr. Carey Alexander Washington created this Life Tributes page to make it easy to share your memories.

Send flowers to the Washington family.