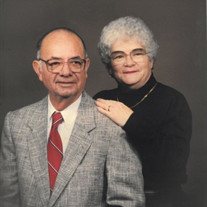 Carolyn Huggins Hammond of Columbia died Monday, January 3rd, 2022, at the age of 89. Carolyn was born April 2, 1932, in Aynor, SC to Mr. and Mrs. Jesse Evan Huggins. She married James David “J.D.” Hammond May of 1951. They were married until he passed away in 1995. She worked alongside of her husband, until 1984, at Captain’s Kitchen “Home of the ALL YOU CAN EAT”. Captain’s Kitchen was one of the best seafood restaurants in Columbia at the time. She was a member of Spears Creek Baptist Church for 34 years, where she later became a part of the Rejoicers senior group. She was also a member of the Valley Voices at Spring Valley Baptist Church, a group of ~100 seniors who loved to sing to the Lord, for many years. Surviving her is her daughter Phyllis Ford (Tim) of Elgin, her 2 granddaughters, Sarah Williams (Sam) of Lugoff and Meredith Ford of Elgin and her 3 great-grandchildren, Ella (8), Luke (7) and Olivia Kate (4) Williams. She is also survived by her sister Beth Broach (Danny) of Scranton. She was predeceased by her husband James David “J.D.” Hammond, her brother Wofford Huggins and sisters Hannah Wheeler and Frankie Harris. The funeral service for Ms. Hammond will be held at 3 o’clock on Friday, January 7th, at Spears Creek Baptist Church, 116 Spears Creek Baptist Church Lane Elgin, SC 29045. Family will receive friends prior to the service at 1:30 PM. Shives Funeral Home, Trenholm Road Chapel is assisting the family. In lieu of flowers the family asks that donations be made to the Special Olympics South Carolina in her memory and in honor of her granddaughter with special needs. Special Olympics South Carolina, 109 Oak Park Drive Irmo, SC 29063. *Mail-in donation forms can be found on their website at Support.SpecialOlympics.org, donations can be made on their website as well*

The family of Ms. Carolyn Huggins Hammond created this Life Tributes page to make it easy to share your memories.

Send flowers to the Hammond family.