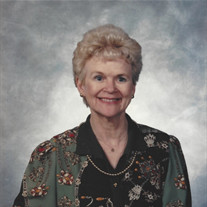 Charlene M. Blakely, 86, was born November 24, 1934 in St. Paris, OH. She was a beloved wife, mother, Grambee, sister, aunt, and friend. Mrs. Blakely passed away early in the morning on Thursday, March 18, 2021. Charlene’s intelligence and humor often made her the life of the party, but it was her loving and amazing nature that made us love her so much. She graduated from Wittenberg University with a bachelor’s degree in education and taught school in OH and FL. She met her “Prince Charming” on a blind date arranged by her foster mother, Helen and Helen’s realtor, the father of her now husband of 61 years. It was not quite “love at first sight” as he was in pilot training about six hours away; however, it did not take long and she was soon hooked, once he took her dancing and dating over the weekends and she loved that he owned a 1958 Volkswagen convertible! Charlene and Bob were married less than a year after that fateful night and Charlene was an extremely supportive Air Force wife for 22 years. They moved to France on Bob’s first flying duty and to multiple assignments stateside thereafter. Charlene was the consummate (self-proclaimed) “Domestic Engineer” and there were many times when she was “head of the household” when Bob was supporting Air Force missions. She was extremely proud of their service to our country. Charlene continued to be Bob’s rock and champion as he transitioned to the civilian life and his career in the aerospace industry, as it had them traipsing across the country again. One stop was in the Washington, D.C. area, where Charlene did a little thing like volunteering at the White House and reading the then president’s mail. She often told the story of having to “vet” a letter from his own grandchildren. Bob and Charlene officially retired and settled down in Columbia, SC in 1994, where they have lived for 27 years. Charlene was an active member of St. Paul’s Lutheran Church, the Symphony League, and regularly played Bridge at the Ft. Jackson Officer’s Club for many years. Charlene and Bob bought a house big enough to host their family for jubilant family gatherings, of which we partook for years. We have memories to last a lifetime, like hours long gift opening sessions at Christmas, pausing only to eat her scrumptious pound cake while she put in the turkey in the oven, the endless and often rambunctious family game nights, and indulging in her delicious go to meals – meatloaf and ham salad – that could feed an army. Charlene could do mad impressions of Red Skelton and the Wicked Witch of the West and was a woman with a multitude varied interests and talents. The list includes: stage performer, baritone player, cheerleader, history buff, avid bridge player, church mouse, Sunday school teacher, choir member, dancer extraordinaire, crossword puzzler, bowler, world traveler, one of the original soccer moms (circa 1977); however, it was her faith, her husband, her three daughters, two sons-in-law, three adored grandchildren, her extended family and friends (who are family) were what she cherished so very deeply until the day she died. She reveled in visiting and being visited through the years. Charlene leaves behind her beloved husband Bob; daughters, Janie, Karen (Randy), and Mary Ellen (Jim); grandchildren, Mimi, Kenzie and Austin; sisters, Mary and Lois; foster brother, Jim, as well as many adored nieces, nephews and friends. Charlene was preceded in death by her father, Charles; mother, Kathryn; sister, Peach; brother, Charles and foster mom, Helen. The funeral service for Mrs. Blakely will be held 2 o’clock, Wednesday, March 31st at St. Paul’s Lutheran Church, 1715 Bull St., Columbia, SC 29201 with Rev. Dr. Tony Metze officiating. The family will receive friends prior to the funeral beginning at 1 o’clock in the Good Shepherd Room. A private burial will be held at a future date at Arlington National Cemetery. For those unable to attend, a livestream of the service will be available on Mrs. Blakely’s tribute page at ShivesFuneralHome.com. All are invited to attend; however, masks and social distancing are required to create a safe environment for all. In lieu of flowers, Charlene and Bob would be appreciative of donations to St. Paul’s Lutheran Church, where they have been members for 26 years.

The family of Mrs. Charlene Magovern Blakely created this Life Tributes page to make it easy to share your memories.

Send flowers to the Blakely family.