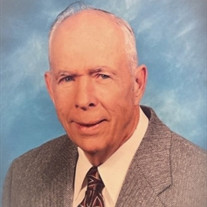 SMSGT Charles Spurgeon Beam, US Air Force, (Ret.), passed away peacefully on December 29, 2021, at the age of 87. Born in Shelby, North Carolina on June 29, 1934, he was the son of the late David Marcus Beam and Ada Mae Spurling Beam. He was highly devoted to his family, God, and his students. After graduating from Waco High School, he enlisted in the US Air Force to serve his country and to see the world. Six months later he returned to Shelby, NC to marry his high school sweetheart, Betty Louise Curry. They were very happily married for 67 years before her passing last year. After serving 20 years in the Air Force, including teaching leadership at Clemson University, Charles and his family retired in Columbia, South Carolina, where he pursued a fulfilling career as a Junior ROTC instructor at C.A. Johnson High School and then Spring Valley High School. At both schools he helped build strong Junior ROTC programs and drill teams. Throughout the years, his students won twenty consecutive State Championships, 5 National Championships, and numerous other drill meets. One of his teams was invited to perform at a White House function. While helping his students with their achievements, he attended the University of South Carolina, earning his bachelor’s degree and studying for his master’s degree. He often worked on his homework along with his children at the dining room table. Upon his retirement in 1998 the South Carolina General Assembly issued a Concurrent Resolution honoring his 27 years of service in the Air Force Junior ROTC program via bill number 5107. Excerpt: “Whereas, Sergeant Beam is an outstanding individual and a superb leader and teacher; he has touched the lives of thousands of young people; he has made countless contributions to the excellence of Air Force Junior ROTC and is highly deserving of recognition.” Charles was tough but loving with his students. He was loved and appreciated for his encouragement for them to be their best. Charles and Betty were blessed with his students constantly reconnecting with them to show their appreciation for the positive influence on their lives. He is survived by his son Chuck Beam and his wife, Debbie Thomas Beam; his daughter, Cindi Beam Hunt and her husband, Malcolm Hunt. Additionally, Charles is survived by his three grandchildren, Chris Beam and his wife, Amanda Schneider Beam, Abbey Beam and Katie Beam Miller; as well as his three great grandchildren, Mason Miller, Madelyn Beam, and Amelia Beam. The graveside service for SMSGT Beam will be held at 1 o'clock, Wednesday, January 5th at Fort Jackson National Cemetery, 4170 Percival Road, Columbia, SC. Shives Funeral Home, Trenholm Road Chapel, is assisting the family. In lieu of flowers, memorial donations may be made to Northeast Presbyterian Church, 601 Polo Rd, Columbia, SC 29223.

SMSGT Charles Spurgeon Beam, US Air Force, (Ret.), passed away peacefully on December 29, 2021, at the age of 87. Born in Shelby, North Carolina on June 29, 1934, he was the son of the late David Marcus Beam and Ada Mae Spurling Beam. He... View Obituary & Service Information

The family of SMSGT Charles Spurgeon Beam, US Air Force, (Ret.) created this Life Tributes page to make it easy to share your memories.

Send flowers to the Beam, US Air Force, (Ret.) family.