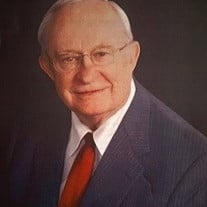 Charles Walter Frick, of Columbia, SC, passed away peacefully on January 19, 2021. Born in Prosperity, SC on December 30, 1932, Charles was the son of the late Harry Otis Frick and Mary B. Werts Frick. He grew up in Prosperity, SC and learned to drive a 1940 Ford with a stick shift. The first car he bought was a green Bantam. "I pushed it more than I drove it," he exclaimed. Charles attended the University of South Carolina, studying Business Administration and was a loyal Gamecock fan. His career included service in the US Army at Fort Jackson and the reserves in the US Air Force. He enjoyed a 17-year career with Leitzey Distributors as a Toy Purchasing Manager. Charles completed his career working for Anchor Continental Tape in Columbia, retiring at the age of 62. Charles was devoted to his family and his church. For many years he was an active member of Trinity Lutheran Church and is currently a member of Forest Lake Presbyterian Church. He relished his time with his children, grandchildren, and great-grandchildren. Charles was an avid bowler and golfer and spent many enjoyable hours woodworking, and making model airplanes. Survivors include his children, Walter (Stephanie) Frick of Charleston, SC, Robert (Katie) Frick of Union Mills, NC, Catherine (David) Frick Eldridge of Prosperity, SC; seven grandchildren, Mary Helen (Nate) Wofford, Michael (Kirsten) Frick, Robert Sam (Deidre) Frick, Katherine Abby Frick, Walker, Grace, and Riley Eldridge; three great-grandchildren, Damian and Clare Wofford, and Hudson Frick. He was predeceased by his sister, Harriet Frick Moore of Columbia, SC and a great-grandson, Patrick Oliver Wofford of Charleston, SC. A memorial service for Charles will be held at 2 o’clock Saturday, February 6th at Forest Lake Presbyterian Church, 6500 N. Trenholm Rd, Columbia, SC 29206. Please note that masks are required and social distancing will be enforced to maintain a safe environment for all. A livestream may be viewed by visiting his tribute page at ShivesFuneralHome.com. Shives Funeral Home, Trenholm Road Chapel, is assisting the family. Memorials may be made to Forest Lake Presbyterian Church, 6500 N. Trenholm Road, Columbia, SC 29206.

Charles Walter Frick, of Columbia, SC, passed away peacefully on January 19, 2021. Born in Prosperity, SC on December 30, 1932, Charles was the son of the late Harry Otis Frick and Mary B. Werts Frick. He grew up in Prosperity, SC and learned... View Obituary & Service Information

The family of Mr. Charles Walter Frick created this Life Tributes page to make it easy to share your memories.