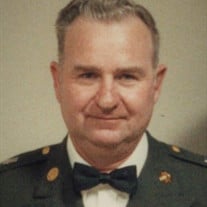 SFC Charles Edward Yarborough, US Army (Ret.), 84, of Columbia, died Friday, September 18, 2020. Born October 20, 1935, in Florence County, SC, he was a son of the late Zanders Yarborough and Nettie Rosa Lee Yarborough. SFC Yarborough honorably served his country for more than 22 years in the US Army. During his enlistment, he completed three tours in Germany and one tour in South Korea. SFC Yarborough also received many commendations and awards during his military career. Following his retirement, he enjoyed a second career at Dick Smith Nissan for over 15 years. SFC Yarborough had a huge heart and adored spending time with his family. He also relished every opportunity to go fishing. Survivors include his three daughters, Anna Rojas (Rafael) of Columbia, Saundra Beard (Bobby) of Coward, and Sharon McKay of the home; 10 grandchildren, 16 great-grandchildren, five siblings, and his special companion, Lady. In addition to his parents, he was preceded in death by four siblings. The graveside service for SFC Yarborough will be held 1 o’clock, Thursday, September 24th at Fort Jackson National Cemetery, 4170 Percival Rd, Columbia, SC with full military honors. The family will receive friends prior to the graveside service beginning at 11:30 o’clock at Shives Funeral Home, Trenholm Road Chapel, 7600 Trenholm Road Ext, Columbia. Everyone is invited to attend but will be asked to abide by the state’s recommendations of wearing masks and social distancing to provide a safe environment for all. Memorials may be sent to St. Jude Children’s Research Hospital, 262 Danny Thomas Place, Memphis, TN 38105.

The family of SFC Charles Edward Yarborough, US Army (Ret.) created this Life Tributes page to make it easy to share your memories.

Send flowers to the Yarborough, US Army (Ret.) family.