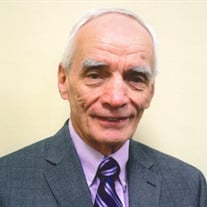 SFC Daniel “Dan” James Heggie, US Army (Ret.), 76, was called home on Thursday, September 3, 2020. He died peacefully at his home. Dan is preceded in death by his mother, Helen Marie Woodside; stepfather, Nevin Woodside; father, Samuel Stewart, and daughter, Susie. He is survived by his beloved wife, Yong Hui; sons, John, Daniel Jr. (and wife Anna), Paul (and wife Carly); daughter, Kimberly (and husband Billy); nephew, Corey Allen; sisters, Carol Allen, Eleanor Schenker (and husband Kerry), and Mary Beth Pritchard; eight grandchildren, and eight great-grandchildren. Dan was born September 18, 1943 in New Kensington, Pennsylvania. He honorably served his country in the US Army for more than 20 years. Following his retirement, he was employed at the US Reserve Bank of Cleveland. Dan was active in his church and faith. In 2016, he and his wife moved to Columbia, SC, where he became an active volunteer at Victory Ranch, which aids active military members. If and when Dan ever relaxed, he loved to go fishing, whether he caught a fish or not. Dan loved staying busy and always had a project going. He brought a smile to everyone he met. He fought the good fight, finished the race, and kept the faith. A private graveside service with full military honors will be held at Fort Jackson National Cemetery with Rev. Dennis Banks officiating. A livestream of the service will be available at 9 o'clock Thursday, September 10th by visiting http://www.shivesfuneralhome.com/current-webcast. In lieu of flowers, donations may be made to Victory Ranch, where Dan loved to be and work by visiting https://donatecadence.org/projects/full-view/victory-ranch-ft-jackson

The family of SFC Daniel "Dan" James Heggie, US Army (Ret.) created this Life Tributes page to make it easy to share your memories.

Send flowers to the Heggie, US Army (Ret.) family.