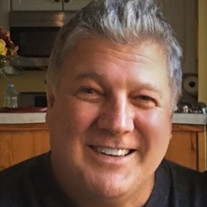 David Michael Beaudoin, 61, of Elgin, SC, died Friday, April 30, 2021. Born October 1, 1959, in Concord, Massachusetts, he was the son of the late Rene Alfred Beaudoin and Patricia Frances (Mullen) Beaudoin. David served in the U.S. Coast Guard from 1981-1984. He then pursued a degree in aviation at Daniel Webster College in Nashua, NH. David was known for his incredible sense of humor and his contagious laughter among his family and friends. David loved talking to everyone and never met a stranger. He truly lived life by simple pleasures: conversing with friends and family, creating and serving up culinary dishes, spending time outdoors, fishing for Bluefish and Stripers off of Cape Cod, and taking long walks with his beloved dogs. He loved college football and was a loyal Boston College fan. David’s greatest love was that of his wife, Kathy, and their four beautiful children. He is survived by his wife and partner in life of 25 years, Kathy Beaudoin, his children Michael Cedric Beaudoin, Blythe Kristen Beaudoin, Kathlyn Eve Beaudoin, and Keith David Beaudoin, all of Elgin, SC; brothers, Robert Beaudoin and his wife Anne, Rene Beaudoin and his wife Anne Marie, Shaun Beaudoin and his wife Lisa; sisters, Pamela Ward, Patrice Gallen and her husband Michael, Nancy Peterson, and Ann Marie Beaudoin and numerous nieces and nephews. In addition to his parents, David was preceded in death by his brothers, Paul Beaudoin, Raymond Beaudoin, and brother-in-law Michael Ward. He will be deeply missed by his family, friends, and all who knew him. A memorial service will be held at a future date and will be announced by Shives Funeral Home, Trenholm Road Chapel, 7600 Trenholm Road Ext., Columbia, SC.

The family of Mr. David Michael Beaudoin created this Life Tributes page to make it easy to share your memories.

Send flowers to the Beaudoin family.