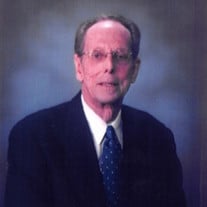 David Bays Calhoun, age 83, went to be with the Lord on Friday, April 9, 2021, after a long battle with several health conditions. He died at home in Batavia, Illinois, with his wife, Anne, by his side, just as she had been, caring for him continuously, throughout the last years of his life. Born on November 9, 1937, in Flat Gap, Kentucky, David grew up in South Carolina. He is preceded in death by his father, David Harris Calhoun; his mother, Pauline Bays Calhoun; and two brothers, Paul Harris Calhoun and John Herbert Calhoun. He met Anne Berry Fleece when they were both students at Columbia Bible College (now Columbia International University), and they married on May 29, 1961. In addition to Anne, David’s survivors include two adult children, David Allen (Mary Ann) Calhoun of Danville, Virginia, and Isabel (Jon) Farrar of Batavia; two grandchildren, Ian Farrar and Zoe Farrar; and a sister-in-law, Eva Johnson Calhoun of Sumter, South Carolina. After earning a Bachelor of Divinity and a Master of Theology from Covenant Theological Seminary in St. Louis, David was ordained to the gospel ministry in 1963 and returned to Columbia Bible College to teach for four years. He studied briefly with Francis Schaeffer at Swiss L’Abri and then served as principal of Jamaica Bible College in Mandeville, Jamaica, from 1967 to 1971. In 1972, he received a ThM in New Testament from Princeton Theological Seminary and began several years of service as a coordinator and trainer for Ministries in Action. He later became a founding board member and President of Presbyterian Mission International. David received his PhD from Princeton Seminary, writing his dissertation on Princeton Seminary’s nineteenth-century student missionary movement. In 1978, Dr. Calhoun joined the faculty of Covenant Seminary, where he taught church history until his retirement in 2008. He celebrated his retirement by walking all 62 miles of the St. Cuthbert’s Way in Scotland and England, places he considered almost second homes. After retiring, he maintained an office on the Covenant Seminary campus for several years — teaching occasional classes, preaching, and continually receiving students who wished to talk to him — before he and Anne moved to the Chicago area to be closer to family. A respected scholar and author, Dr. Calhoun published many books, with Anne’s expert editing. This output includes Knowing God and Ourselves: Reading Calvin’s Institutes Devotionally (Banner of Truth, 2016); the highly regarded, two-volume Princeton Seminary (Banner of Truth, 1994/1996); The Glory of the Lord Risen Upon It: First Presbyterian Church, Columbia, South Carolina, 1795 – 1995 (First Presbyterian Church, Columbia, 1994); and Swift and Beautiful: The Amazing Stories of Faithful Missionaries (Banner of Truth, 2020). Those are just a few of numerous titles. In the weeks before his death, David was able to complete A Sheep Remembers, a meditation on the Twenty-third Psalm interwoven with his own testimony. His legacy does not end there. David was a friend, teacher, and mentor to generations of students, faculty, and alumni at Covenant. Throughout his 30 years of service there, he loved helping students gain an appreciation of Reformed theology and the heritage of the Christian faith in general and bringing the people and events of the past to life. He taught many to see the grace of God at work even in the darkest periods of church history. Dr. Calhoun considered it a great privilege to serve Galilee Baptist Church in St. Louis during the last decades of his life. He loved and admired the people of that church and spoke often of how much they taught him. His decades-long struggle with cancer and related conditions provided the opportunity for another of Dr. Calhoun’s legacies. He spoke openly about his struggles with disease and wrote frequently about the relationship between suffering and faith. The strength of David’s faith and his sense of grace and humor in the face of adversity inspired and encouraged generations of his friends, colleagues, and students — as well as medical staff — along the way. A memorial service will be held at two o’clock in the afternoon of April 30th at First Presbyterian Church, 1324 Marion Street, Columbia, South Carolina. A livestream of the service may be seen by visiting https://www.firstprescolumbia.org/live The family would like to extend gratitude to the great number of healthcare professionals who cared so well for David over the years at Mercy Hospital and St. Luke’s Hospital in St. Louis, Delnor Hospital in Geneva, Illinois, and elsewhere. In lieu of flowers, memorial contributions can be made to the Dr. David B. Calhoun Scholarship at Covenant Seminary. Gifts can be made online at www.covenantseminary.edu/support/give-now/ or by check payable to Covenant Seminary with “Dr. Calhoun Scholarship” in the memo. In addition, please mail condolences for the family to Covenant Seminary, attn: development office, 12330 Conway Rd, St. Louis, MO 63141.

David Bays Calhoun, age 83, went to be with the Lord on Friday, April 9, 2021, after a long battle with several health conditions. He died at home in Batavia, Illinois, with his wife, Anne, by his side, just as she had been, caring for him continuously,... View Obituary & Service Information

The family of Dr. David Bays Calhoun created this Life Tributes page to make it easy to share your memories.

Send flowers to the Calhoun family.