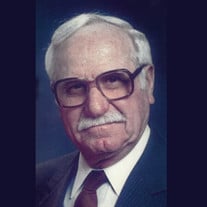 The funeral service for David Oneil Derrick will be held 2 o’clock Tuesday, August 3rd at Ascension Lutheran Church, 827 Wildwood Avenue, Columbia, SC 29203 with Pastor Jaqueline Utley officiating. Interment will follow at Greenlawn Memorial Park, 845 Leesburg Rd, Columbia, SC 29209. The family will receive friends from 6 until 8 o’clock Monday in the Fellowship Hall at Ascension Lutheran Church. Shives Funeral Home, Trenholm Road Chapel, is assisting the family. Mr. Derrick passed away on Thursday, July 29, 2021. Born December 25, 1920, in Chapin, SC, he was a son of the late Thaddeus and Lilla Eargle Derrick. He was the last surviving grandson of Walter and Amanda Swygert Derrick. He honorably served his country during WWII in the European Theater. After returning from his US Army service, he and his brother, Walter, operated Derrick’s Gulf Service, which later became BP Oil. Mr. Derrick was a member of Ascension Lutheran Church. He was the past president of the Lutheran Church Men, served on church council, and many other church committees. He truly loved his Ascension family, and they were very good to him. Mr. Derrick was a Mason, as well as a member and past president of the North Columbia Optimist Club. He was preceded in death by the love of his life, Violet B. Derrick in 2019, following 72 years of marriage. In addition to his wife, Mr. Derrick was preceded in death by his brothers, Horace, Walter, and Homer Derrick; sisters, Reba Wingard, Lucille Epting, Kathleen Nobles, Linnie Belle Eargle, Margaret Corley, and Anita Metze. Survivors include his daughter, Dianne Derrick of Columbia, as well as numerous nieces, nephews, and friends. The family would like to extend a special thank you to Dr. John B. Wells, III, Dr. Kural Kanitkar, Margaret Simpson, Chris Horning, as well as the friends and neighbors of both the Northwood Hills and Eau Claire community. Memorials may be sent to Ascension Lutheran Church. Due to Covid-19 restrictions adopted by Ascension Lutheran Church, guests attending family visitation and the funeral service are asked to wear facemasks for safety.

The family of Mr. David Oneil Derrick created this Life Tributes page to make it easy to share your memories.

The funeral service for David Oneil Derrick will be held 2 o’clock...

Send flowers to the Derrick family.