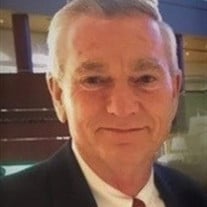 Dennis Rohn Blaylock, 66, passed away Sunday morning, May 16, 2021, in Palmetto Health Richland after a brief illness. The beloved husband of Lynn Snipes Blaylock, Dennis was born in Gastonia, North Carolina, on September 5, 1954, to the late Command Sgt. Major Samuel Luther and Ruby Adaline Deanhardt Blaylock. While a student at Spring Valley High, Dennis began working at Rockwell Automation, where he would remain for four decades before finishing his career at Trane. While his working relationships were strong ones, the ones Dennis treasured most were at home. His life revolved around family, particularly his wife Lynn and son Cameron Rohn Blaylock, of whom he was deeply proud. Dennis coached and faithfully attended countless little league and baseball games throughout his son’s childhood, never missing a chance to watch Cameron play. Dennis was also a surrogate father to many of Cameron’s friends, children in his neighborhood, and extended family who looked to him as a steady, tireless, caring presence in their lives. He will be remembered as a man who loved and taught many to water-ski, had a wickedly wry sense of humor, manned the grill at family cook-outs, and handed out second slices of cake to his favorite kids when their parents weren’t looking. He is survived by his loving wife of 39 years, as well as his son and daughter-in-law, Cameron and Alicia Blaylock of Gaithersburg, Md. This summer, Dennis’ first grandchild, Amelia Blaylock, will be born. She will grow up knowing just how eager her grandfather was to meet her; Dennis loved Amelia already. Also mourning his loss are Dennis’ sister and brother-in-law Sheila and Robert Sullivan; his sister Pamela Helms; his brother- and sister-in-law Larry and Louise Snipes; and his mother-in-law Lois Canaday. A devoted uncle, Dennis is survived by nieces Melissa Deaver, Anne Snipes Smith, and Blake Helms, and nephew Lawrence Snipes. His great-nephews and nieces Warren Deaver, Matthew Whitehead, Laci Whitehead, Tristen Jones, Jolie Byers, Madelynne Simmons, Mac Smith, Mary Brooks Smith, Chapman Smith and Mae Smith always brought a smile to his face. Dennis was preceded in death by his parents, Sam and Ruby Blaylock; father-in-law John Snipes; brother-in-law Ed Helms; and nephew Matthew Deaver. Details for a gathering to celebrate Dennis’ life are forthcoming.

Dennis Rohn Blaylock, 66, passed away Sunday morning, May 16, 2021, in Palmetto Health Richland after a brief illness. The beloved husband of Lynn Snipes Blaylock, Dennis was born in Gastonia, North Carolina, on September 5, 1954, to the... View Obituary & Service Information

The family of Mr. Dennis Rohn Blaylock created this Life Tributes page to make it easy to share your memories.

Send flowers to the Blaylock family.