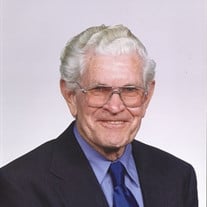 Don O’Cain Daniels, Sr., lovingly known as “BeepBeep” to family and friends, went home to be with the Lord on December 8, 2020. He was born on December 16, 1925, in Columbia, South Carolina to Preston Alexander and Ruby O’Cain Daniels. He had three brothers and two sisters. He was the husband of Kathleen “Kat” Smith Daniels and they were married for sixty-eight years. Don was a dedicated member of Pine View Baptist Church for sixty-nine years, where he served as Chairman of Deacons, Sunday School Director and Treasurer. He was the leader in all phases of construction work performed on the church and sketched the plans for the church parsonage, as well as additions to the church and the Fellowship Building. Don was a Veteran of World War II. He became a Marine at the young age of eighteen years and served for the 5th Marine Division on Iwo Jima. He participated in the Occupation of Japan on Kyusha Island, Japan. Don was well thought of in the tile, marble, and terrazzo business. He worked with Niggel Brothers for twenty-eight years, Lide and Associates, Inc. for thirteen years and he owned his own business for twelve years. As a member of the Blythewood Masonic Lodge No. 395 AFM, he was presented a Seventy-Year Service Award in August of 2019. Don is survived by sons, Don O’Cain “Donnie” Daniels Jr. (Linda), Charles Alexander “Alex” Daniels (Carolyn); four grandchildren, William Daniels (Allison), Kai Daniels, Kiera Daniels, Kale’a Daniels; two great grandchildren, Emma Daniels, and Erin Daniels. He is also survived by one brother, John Earl Daniels. Don was preceded in death by his wife, Kathleen “Kat” Daniels; brothers, Preston Daniels, and William Daniels; sisters, Eudora Harmon, and Laura Castles. Due to the devotion, steadfastness and love of his family, Don was able to remain at home during his illness and until he passed. The family extends special appreciation to Prisma Hospice, the caregiving staff of DayBreak, and to special friends, Al Dantzler, Tim Johnson, and David Dixon. The funeral service for Mr. Daniels will be held 2 o’clock, Saturday, December 12th, at Shives Funeral Home, Trenholm Road Chapel, 7600 Trenholm Road Ext., Columbia. Burial will follow the service in Pineview Baptist Church Cemetery. The family will receive friends an hour prior to the service at the funeral home. For those who wish to pay their respects, a register book will be available from 9 until 6 o’clock Friday at the funeral home. A livestream of the service may be seen by visiting his tribute page at ShivesFuneralHome.com. The family suggest that memorials be made to St. Jude Children’s Research Hospital, 501 St. Jude Place, Memphis, TN, 38105, or a charity of one’s choice.

The family of Mr. Don O'Cain Daniels, Sr. created this Life Tributes page to make it easy to share your memories.

Send flowers to the Daniels family.