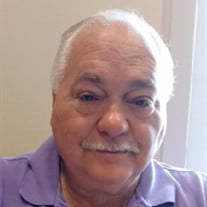 Donald “Don” Benedict Kinder, 74, of Lugoff, died on Saturday, July 3, 2021. Born in Richmond, Virginia, on October 18, 1946, he was a son of the late Benedict Fred and Mary Frances Johnson Kinder. Don served in the Air Force during the Vietnam War and later started an exterminating business in 2001 which he successfully owned for many years. Prior to owning and operating his business, he worked as a Heavy Equipment Operator for over 40 years. He was a loving person with a kind and gentle spirit who was patient and always enjoyed being around people and spending time on his deck at home. Animals equally loved Don as much as he loved them. Don was an avid member and supporter of the VFW post 11079 in Elgin. Survivors include his wife, Kay Drake Kinder; sister, Pattie “Rene” Moore (Dickie); nieces, Mary Moore and Rachel Moore; daughter, Michelle Outlaw; grandchildren, Callum Outlaw (Katie), Elizabeth Outlaw, Gabriel Medina, and Dylan Owens; and great-grandchildren, Jasper Outlaw and Drake Outlaw. In addition to his parents, he was preceded in death by his sister, Rosemary “Rosie” Kinder; and son, Boyd Outlaw. A visitation for Mr. Kinder will be held from 4 until 6 o’clock, Friday, July 9th, at Shives Funeral Home, Trenholm Road Chapel, 7600 Trenholm Road Ext., Columbia. Memorials may be made to the VFW Post 11079 in Elgin, SC, 2464 Bowen Street, Elgin, SC 29045.

The family of Mr. Donald Benedict Kinder created this Life Tributes page to make it easy to share your memories.

Send flowers to the Kinder family.