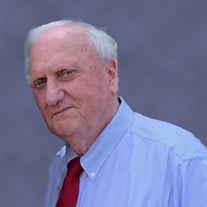 Donnie C. Fulmer, Jr., 85, of Chapin, South Carolina, formerly of Columbia, died on Wednesday, April 28, 2021. Born in Charleston, SC, on June 16, 1935, he was a son of the late Donnie Cecil Fulmer, Sr., and Odessa “Dessie” Nettles Fulmer. Donnie was a proud graduate of The University of South Carolina and a member of Riverland Hills Baptist Church for many years. Donnie proudly served an enlistment in the United States Army in Germany and loved to talk about his military days especially with his oldest grandson, Taylor Fallaw who is also a veteran. He worked for the Atlantic and Pacific Tea Company for over 30 years winning many awards and accolades as manager in his department. His second career was with the South Carolina State Retirement System where he won Employee of the Year in 1998. After working long enough to retire from there, he immediately was hired back because Donnie truly loved his job at PEBA and the people he worked with staying there and working full time until his death. He also ran his own tax business from his home. Besides being a member of the Lions Club for many years, Donnie was also very active in church all of his life serving as a deacon, usher and on many financial committees over the years. Donnie will be remembered for fiercely loving his family, loving to talk and loving other people. Donnie did not meet a stranger and could get to know someone in the span of five minutes and have made a lifelong friend. His ministry was helping others make wise decisions for their future and making people feel at ease even in the most difficult times. If you knew him, you definitely knew his daughters by name as well the names of his 3 grandchildren because he was going to tell you about his family even if you didn’t want to listen. He is survived by his daughters, Karen Fallaw (T’Wayne) and Susan R. Fulmer; grandchildren, Taylor Fallaw, Aidan Fallaw and Cade Fallaw; as well as his sisters Angela Bates, Barbara “Bobbie” Ortaliz and Diane Outen. In addition to his parents, he is preceded in death by his beloved wife, Gertrude “Trudy” Boan Fulmer and younger brother Daniel W. Fulmer. Following a private burial at Fort Jackson National Cemetery, a public “Celebration of Life” will be held at Riverland Hills Baptist Church, at 2 o’clock, Friday, May 7th. The family will receive friends following at the church. Shives Funeral Home, Trenholm Road Chapel, is assisting the family. In lieu of flowers, the family requests donations be made to Riverland Hills Baptist Church, 201 Lake Murray Blvd, Irmo, SC 29063.

The family of Mr. Donnie Cecil Fulmer, Jr created this Life Tributes page to make it easy to share your memories.

Send flowers to the Fulmer family.