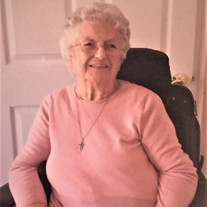 Dorothy Martin Blume of Charlotte, North Carolina passed away on November 2, 2021. She was born in Blythewood, South Carolina on May 11, 1932, to Daulton G. Martin, Sr. and Clara Lee Boney Martin of Blythewood, SC. She was preceded in death by her husband, John William (Buddy) Blume, and infant son, William Madison Blume, of Blythewood, SC. Dorothy was a devoted wife, mother, grandmother, and great grandmother. Survivors include her daughters, Joni Blume Ingram, and husband Bill, of Charlotte, NC, and Debbie Blume Desso and husband, Henry of Jonesboro, Ga, grandchildren, Lori D. Noble, of Garner, NC, Tony W. Desso and wife Kristina, of Stockbridge, Ga. and Martin L. Ingram of Charlotte, NC. Five great grandchildren; Justin Noble and Matthew Noble of Garner, NC, AJ Desso and James Desso of Stockbridge, GA and Jonah Ingram of Charlotte, NC., as well as five wonderful Sister-in-Laws in South Carolina and many loving nieces and nephews. Ms. Blume, despite having Polio at age sixteen, worked in her husband’s business managing the office, bookkeeping and material ordering functions for over thirty years. Later she began working for South Carolina National Bank in the data processing department, which she greatly enjoyed and was highly acclaimed. She was a person always willing to give of her time and self in any capacity to help others. Upon retiring from the bank, she focused on community endeavors, delivering meals on wheels, assisting with voter registration, and serving on the Blythewood Town Council. Her civic work was honored by the Daughters of the American Revolution, South Carolina chapter, with their Community Services award. Ms. Blume’s home on Langford Road in Blythewood was known as the “House of The Open Door.” All were welcome for meals and always conversation to discuss her love of God and witness to anyone who needed the encouragement that she based her life on. Ms. Blume was a bright light in an ever-changing world. She loved God, her family, and her community of friends that she made where-ever she was in her life. The family would like to express their appreciation for all the help and care given to Dorothy by Hospice and Palliative Care Charlotte NC Region during the past two years. She made many friends and acquaintances at the assisted living and skilled nursing facilities while living in Charlotte. She touched the lives of all she met, and the family appreciates the wonderful, thoughtful, and respectful care she was given. A memorial service will be held at Sandy Level Baptist Church, Blythewood South Carolina on November 18, 2021, at 3:00 PM where Dorothy was a member from early childhood. It will be officiated by Reverend Ben Newman, her pastor for many years and the church pastor, Reverend Chris Hanley. The family requests that in lieu of flowers, donations may be sent to Hospice and Palliative Care of Charlotte Region, 7845 Little Avenue, Charlotte, NC28266 or Carmel Hills Assisted living 2801 Carmel Road, Charlotte, NC 28226.

Dorothy Martin Blume of Charlotte, North Carolina passed away on November 2, 2021. She was born in Blythewood, South Carolina on May 11, 1932, to Daulton G. Martin, Sr. and Clara Lee Boney Martin of Blythewood, SC. She was preceded in death... View Obituary & Service Information

The family of Mrs. Dorothy Martin Blume created this Life Tributes page to make it easy to share your memories.

Send flowers to the Blume family.