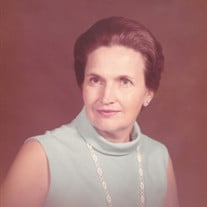 Dorothy Green Tribble of Columbia, South Carolina, died peacefully in her home on Sunday, July 18, 2021. Born March 2, 1928, in Decatur, Georgia, Mrs. Tribble was the daughter of the late James Benjamin Green and the late Lillian Clinkscales Green. She was raised on the campus of the Columbia Theological Seminary where her father was Professor of Theology. She graduated from Decatur High School sharing valedictorian honors. She attended Erskine College, and married David Edgar Tribble from Clinton, SC before their senior year. She graduated from Erskine in 1949 as valedictorian of her class, and she and David Tribble were thought to have been the first married couple to have graduated together from the college. She taught school for one year in Joanna, SC after college graduation, and later taught school and sold books in Nashville, TN while her husband David attended medical school at Vanderbilt. Over the next thirty years, she devoted herself to the home, supporting her husband and raising her six sons. She and David moved often during their early life together during his medical education and training, as well as military service, so much so that each of their six sons was born in a different city in five different states. She and Dr. Tribble returned to South Carolina in 1962 as he started his medical practice. They joined the Associate Reformed Presbyterian (ARP) Church in 1962. Both Dot and David had deep ancestral roots in the ARP Church. She was a member of Centennial ARP Church of Columbia for twenty years, and she was then a member of the First Presbyterian Church of Columbia, SC since 1984. During the years of her boys youth, she sang in the church choir and actively participated in church activities. She began singing in her church choir as a teenager and stopped only late in life. After her sons were grown, she became more involved in church leadership. Her work in church leadership was both local and denomination wide serving as President of the women of the church locally and as President of the ARP Women’s Synodical Union (now Women’s Ministries) of the ARP Church. She served on the Erskine College Board of Trustees and the Bonclarken Conference Center Board of Trustees. She served as a Deacon at First Presbyterian Church, and she taught her circle as the bible teacher and served as circle leader for many years. Mrs. Tribble was awarded several lifetime service awards by her local church and her alma mater. Mrs. Tribble is survived by son Curtis Green Tribble, MD of Charlottesville, VA (Megan), son David Edgar Tribble, Jr. of Clinton, SC (Leta), son James Benjamin Tribble, MD of Columbia, SC (Lynn), son Reid Warren Tribble, MD of Columbia, SC (Mary), son John Newton Tribble (Tony) of Atlanta, GA, son William Brice Tribble of Laurens, SC (Ann Marie), daughter in law Sandra McCabe Tribble of Columbia, SC, grandchildren Kelley Tribble Anderson (Brad), Erin Tribble Wilson (Evan), Meg Tribble Milne (Stephen), James Benjamin Tribble, William Laurence Tribble, John Albers Tribble, Blakely Tribble Williams (Blair), David Meole Tribble (Amy), Chandler Tribble Spafford (David), Perrin Quinn Tribble, James Brantley Tribble (Hannah), Mary Ruth Tribble Miller (Ross), Reid Warren Tribble, Jr. (Katie), William Graham Tribble, Katherine Tribble Schwartz (Reid), Lillian Green Tribble, Kathryn Marie Tribble, and 23 great grandchildren. Mrs. Tribble was predeceased by her husband of 72 years, David Edgar Tribble, MD, brothers James Benjamin Green, Jr. and Curtis Vance Green and sister, Mary Green Ripley. One of Mrs. Tribble’s loves was Bonclarken Conference Center in Flat Rock, NC. She began taking her family to the Family Bible Conference yearly in 1966. She later owned a home at Bonclarken where she would spend much of July each year. She took nieces, nephews and her seventeen grandchildren to the annual music conference at Bonclarken. The family wishes to thank Dorothy Hickmon and Shanna Holder for their selfless care of Mrs. Tribble in the home over the past 19 months. The funeral service for Mrs. Tribble will be held at First Presbyterian Church, Columbia, South Carolina, on Thursday, July 22, 2021, at 11:00 am. Visitation with the family will follow the service in Jackson Hall at the church. A private burial at Elmwood Cemetery will occur after the funeral. Pallbearers will be Mrs. Tribble’s seven grandsons. In lieu of flowers, memorials may be made to Bonclarken Conference Center, 500 Pine Drive, Flat Rock, NC 29731: Erskine College, 2 Washington Street, Due West, South Carolina 29639; or First Presbyterian Church, 1324 Marion Street, Columbia, SC 29201. Shives Funeral Home, Trenholm Road Chapel, is assisting the family.

The family of Mrs. Dorothy Green Tribble created this Life Tributes page to make it easy to share your memories.

Send flowers to the Tribble family.