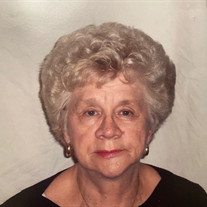 Dorothy Nell Wylie, 83, of Blythewood, died Thursday, July 22, 2021, in Lexington Medical Center after a long illness. She was born in Columbia, February 18, 1938, a daughter of the late Mamie Elmore Mathis and Furman Marion Mathis. Mrs. Wylie was a member of Denny Terrace Baptist Church. She was a talented cook, winning many ribbons at the South Carolina State Fair. She was employed as the Food Dietician for Hyatt Park Elementary and the Lutheran Seminary for many years, after which she became the “Cake Lady” for Rush’s. She later became known as the "Jewelry Lady" selling jewelry and handbags at many schools and businesses. She loved playing the piano and organ by ear, as well as going to flea markets and yard sales. When she did find the time to sit down, she loved to embroider items such as tablecloths and pillow cases for her friends and family. She was preceded in death by her husband, Robert Wilson Wylie and her son, Robert “Bobby” Wilson Wylie, Jr.; sisters: Mary Brewer, Sally Moak, Betty Moak, and Virginia Warren; and brothers: Eldridge Mathis and Douglas Mathis. She leaves behind one sister: Mickey Hafey of Salt Lake City, UT; four daughters: Donya Long (Tony) of Aiken, Patty Chapman (Ted) of Murfreesboro TN, Dottie Kirton (Basil) of Lexington, and Margaret Fisher (Clifford) of Lexington; one son, Christopher Robert Wylie of Blythewood; and many grand-children and great grand-children, as well as many loving nieces and nephews. A graveside service for Mrs. Wylie will be held at 11 o’clock on Monday, July 26, 2021, in Greenlawn Memorial Park, 845 Leesburg Road. Columbia. Officiating will be the Rev. Calvin Snelgrove. The family would like to extend their sincere heartfelt thanks to the many doctors, nurses, and staff members at Lexington Medical Center, South Carolina Oncology, and Providence Heart who provided the very best of care for Mrs. Wylie throughout her illness, In addition, sincere thanks go out to all her friends and family members for the many prayers, gifts, visits, and continuous support that she received throughout her life and illness.

The family of Mrs. Dorothy Nell Wylie created this Life Tributes page to make it easy to share your memories.

Send flowers to the Wylie family.