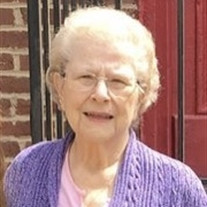 Edna Lucille Bailey Poole, 90, of Columbia, died on Sunday, March 27, 2022. Born in Southern Pines, NC, on October 18, 1931, she was the daughter of the late Dempsey Ernest and Petria Jensen Bailey. After graduation from Southern Pines High School, she attended Watts Nursing School in Durham, NC. She married Scott Poole and lived in Raeford, NC, where she was a member of Raeford Presbyterian Church and many other civic organizations. While at Raeford Presbyterian, she started Mother’s Morning Out and enjoyed time spent with her children. As a wonderful hostess, her home was commonly filled with youth from the church. In order to create a safe place for youth to gather, she started the Open Door Coffee House when her children were in high school. She also served for many years as a leader in Bible Study Fellowship and Community Bible Study. Survivors include her children, John Scott Poole, Jr, Stephen Matthew Poole (Sandy), Petria Poole Parrish (John), Edna Holliday Poole; 10 grandchildren; and six great-grandchildren; sisters, Joyce Stutts, Petria (Tenie) Ingram, Margaret Mattocks, Mary T. Bailey, Sue Haithcock; and brothers, David Bailey and Dempsey John Bailey. In addition to her parents, she was preceded in death by her siblings, Reed Bailey, Carlos Bailey, Douglas Bailey, Bobby Bailey, and Neil Bailey; as well as a daughter-in-law, Carol Poole. Even in her failing health, she remained a loving and faithful sister, mother and grandmother. A memorial service for Mrs. Poole will be held at a later date to be announced. Shives Funeral Home, Trenholm Road Chapel, is assisting the family.

Edna Lucille Bailey Poole, 90, of Columbia, died on Sunday, March 27, 2022. Born in Southern Pines, NC, on October 18, 1931, she was the daughter of the late Dempsey Ernest and Petria Jensen Bailey. After graduation from Southern Pines High... View Obituary & Service Information

The family of Mrs. Edna Bailey Poole created this Life Tributes page to make it easy to share your memories.

Send flowers to the Poole family.