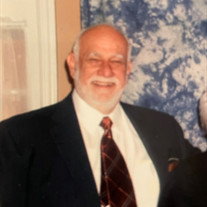 Edward Herbert Hertz, 84, of Columbia, passed away on Wednesday, October 27, 2021. Born on March 10, 1937, in Brooklyn, New York. He was the son of the late John J Hertz and Rachel Gordon Hertz. He was drafted into the Army in 1956. While overseas, a family member “yenta’d” a pen-pal relationship with the woman that would later become his wife. Returning from Europe, he married, had 3 daughters and a successful career in retail management and later on in sales. The family lived in Kentucky, Maryland and Connecticut eventually settling in SC where they put down roots. Joining the Tree of Life soon after arriving ignited his passion for religion and giving back to the community. He just completed an east coast tour to visit family and reconnect with old friends. He was fascinated by genealogy and was excited for every new family member connection. He had a special love for his children, grandchildren, and great grandchildren along with his love of mentoring, baking, and solving the world’s problems one Facebook post at a time. Known as Dad, Daddy, Papa, Grandpa, and the Great Poppa – he will be very missed. Survivors include daughters, Lauren Wilson (Randy), Laina Hertz, Dena Hertz-Wessinger (Ricky); grandchildren, Jayme Wilson (Brandon Chambers), Meadow Wessinger, Jasper Wessinger; great-granddaughters, Jemma Chambers and Jayde Chambers, and many nieces and nephews. In addition to his parents, he is preceded in death by the love of his life, wife Sandy Hertz and brothers Milton, Russell, and Larry. A graveside service will be held at 4 o’clock on Wednesday, November 3rd, at Hebrew Benevolent Society Cemetery, 714 Blanding Street Columbia, SC, with Rabbi Sanford T. Marcus officiating. Shiva to follow at 7 o’clock at the Hertz residence. Shives Funeral Home, Trenholm Road Chapel is assisting the family. In lieu of flowers, memorials may be given to the Tree of Life Temple Brotherhood, Harvest Home Food Bank or the charity of one’s choice.

Edward Herbert Hertz, 84, of Columbia, passed away on Wednesday, October 27, 2021. Born on March 10, 1937, in Brooklyn, New York. He was the son of the late John J Hertz and Rachel Gordon Hertz. He was drafted into the Army in 1956. While... View Obituary & Service Information

The family of Mr. Edward Herbert Hertz created this Life Tributes page to make it easy to share your memories.

Edward Herbert Hertz, 84, of Columbia, passed away on Wednesday,...

Send flowers to the Hertz family.