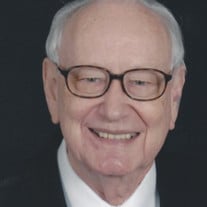 Edward L. Smith, Jr., passed away peacefully on October 12, 2020, in Mobile, Alabama. He was born in Conway, SC in 1925 and graduated from Conway High School in 1942. Ed received a BS degree in Electrical Engineering from the University of South Carolina in 1945, and then entered the U.S. Navy V-12 program at Columbia University Midshipman School in New York City, and was commissioned an Ensign in the US Navy. After briefly serving on a ship in the Pacific at the end of World War II, he was discharged from the Navy in September 1946. He married Mary McQueen Grainger of Conway, SC in 1946, after which he joined Westinghouse Electric Corporation in Pittsburgh, PA in their Graduate Student Training Program. Ed subsequently moved to Baltimore, Maryland, where he officially began his Westinghouse career as an electrical design engineer. His assignments included design and development for military microwave communications and satellite programs, and later he worked as a Program Manager to establish an electronics industry in Iran. He retired in 1986 as the Engineering Manager for the ILS Division of the Westinghouse Defense Electronics Center in Baltimore, Maryland. Following his Westinghouse retirement, Ed worked as a private engineering consultant. He was a Life Member of the Institute of Electrical and Electronics Engineers (IEEE) and was a Registered Professional Engineer in Maryland. After his retirement, he conducted Great Book classes for several years with the John Hopkins University Evergreen Society for adult education. Ed was a devoted member of the United Methodist-Presbyterian Church in Columbia, Maryland, and was active in several committees and the church council. He also served in the Howard County, Maryland, Meals on Wheels program. He and his wife, Mary, moved from Columbia, MD to Blythewood, SC in 2002. There he was active in the Trinity United Methodist Church and taught adult Sunday School, and served on several committees. During his retirement, he continued with his hobbies of woodworking, bridge and reading. Ed was preceded in death by his parents; his beloved wife, Mary G. Smith; his beloved daughter, Kathryn M. Halvorson (Blythewood, SC); his brother, William Wanamaker Smith (Charleston, SC); and his sister, Margaret Smith DuBose (Conway, SC). He is survived by his daughter, Ann M. Bosarge (Grand Bay, AL); two grandchildren, and three great-grandchildren. A graveside funeral ceremony will be held on Tuesday, October 20, 2020, at 3:30 PM, at Trinity United Methodist Church Cemetery in Blythewood, SC. Shives Funeral Home, Trenholm Road Chapel, is assisting the family. Everyone is invited to attend but will be asked to abide by the state’s recommendations of wearing masks and social distancing to provide a safe environment for all. A livestream of Ed’s graveside service will be available by visiting https://www.shivesfuneralhome.com/current-webcast/.

Edward L. Smith, Jr., passed away peacefully on October 12, 2020, in Mobile, Alabama. He was born in Conway, SC in 1925 and graduated from Conway High School in 1942. Ed received a BS degree in Electrical Engineering from the University... View Obituary & Service Information

The family of Mr. Edward L. Smith, Jr. created this Life Tributes page to make it easy to share your memories.