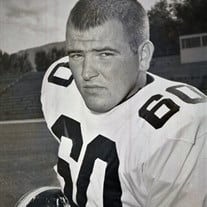 Edwin Nicholas "Nick" Thomasson passed away April 20, 2021. Nick was born in Alamance County, NC on August 13, 1943. He was the seventh of eight children of the late Paul McCauley Thomasson and Alice Watson Thomasson Campbell. Survivors include his brother, Tripp (Teresa) Thomasson of Irmo, SC; brother-in-law, Bernie Lee Massey of Burlington, NC, many nieces and nephews, as well as his cousins, “special cuz’s”, that he dearly loved. In addition to his parents, Nicky was preceded in death by his sisters, Sue Massey and Dawn Troxler; brothers, Greg, Jim, Dan, and Homer Thomasson; sisters-in-law, Bobbie, Nancy, Mildred and Nadine Thomasson; brother-in-law, Paul Troxler; and his stepfather, Claude Campbell. Nick graduated from Altamahaw-Ossipee High School, Class of ’62, with a group of lifelong friends and teammates. He excelled in baseball and football. Nick was selected All-Conference, with many of his teammates and his lifelong best friend, Hooper Harris, in both his Junior and Senior seasons. He was a graduate of Idaho State University, Class of ’67, where he earned his Bachelor of Arts degree in social studies. Nick also excelled in football at Idaho State University. He was named ALL CONFERENCE 2nd TEAM in his Junior and Senior seasons. After graduation, Nick was an assistant football coach for two years under head coach “Babe” Caccia. He then accepted the head football coaching position at Parksley High School in Parksley, VA, where he also taught social studies. After teaching, Nick entered the management program for Kmart Sporting Goods in Burlington, NC, and later managed a Kmart in Huntsville, AL for many years. Afterwards, he traveled throughout Alabama, Tennessee, Kentucky, and Mississippi for Food Distribution Services, before retiring to Columbia, SC. Nick loved family vacations at Myrtle Beach, golfing and fishing with his brothers, brothers-in-law, and nephews. He was a lifelong avid sports fan, especially for his beloved Carolina Tar Heel basketball and Alabama Crimson Tide football teams, which he never missed a game (win or lose). He was also an avid motorsport racing fan and loved watching NASCAR and The INDY 500, which he attended for many years as an annual outing with family and friends. If you knew Nick, he was always “Coach” and could tell you the details of games or the qualification times and speeds of any racecar driver. Nick had an unbelievable instinct for details, which made him successful in all levels of football and business. The service to celebrate Nick's life will be held 2 o’clock Friday, April 23rd at Lowe Funeral Home Chapel, 2205 S. Church St., Burlington, NC 27215, officiated by Rev. S. Mark Clark. The family will receive friends prior to the celebration at the funeral home beginning at 12 o’clock noon. A private burial will be in Alamance Memorial Park, where Nick will be buried beside of his mother and father. The family would like to thank the doctors and staff at Lexington Medical Center and the staff of the Lexington Community Hospice House - Agape Care for all their loving care and compassion shown to Nick during his illness. Memorials may be made to The Agape Care Group, 110 Dillon Dr., Spartanburg, SC 29307 or the American Heart Association, 7272 Greenville Ave., Dallas, TX 75231. Shives Funeral Home, Trenholm Road Chapel, 7600 Trenholm Road Ext., Columbia, SC, is assisting the family in Columbia. Condolences may be shared and a livestream of Nick’s service viewed by visiting LoweFuneralHome.com.

The family of Mr. Edwin Nicholas "Nick" Thomasson created this Life Tributes page to make it easy to share your memories.

Send flowers to the Thomasson family.