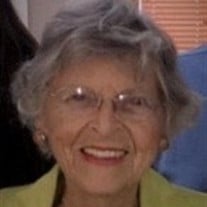 Elizabeth Tatum Flinsch, 97, fondly known as “Betty” went to be with her Heavenly Father on January 20th, 2022. Born April 7, 1924 in Tatum, SC, she was the daughter of the late John and Elizabeth Croom Tatum. She enjoyed her small-town childhood in Marlboro County alongside her sister. She attended Peace College in North Carolina before moving to Columbia and earning her Masters from The University of South Carolina. In her time at Peace, Betty and her sister “Buck” had many adventures that shaped the unique women they grew up to be. Always on the move, Betty enjoyed painting, reading, playing cards, brushing up on foreign languages, sailing, and enjoying the company of every single person she ever encountered. She had a passion for loving others that was contagious and touched the hearts of more than we may ever know. Of all the travel and interesting twists life presented, she considered her greatest accomplishments to be her daughter Elaine, and thus 3 precious grandchildren (4 great grandchildren). She jumped at every opportunity to support all their endeavors and proudly wore her badge as their beloved “Beb”. She leaves a hole in this world and the hearts of many, but, will rest easy knowing we will continue to take care of one another and love like she did. She is survived by her daughter, Elaine Baskin; grandson, Gianpaolo Bonaca (Riley); granddaughter; Catherine Hannah Lesser; grand daughter-in-law, Jamie Bonaca; great grandchildren, Tatum, Cole, Bryce, and Bree Bonaca; as well as her sister, Carolyn Tatum Bethea. In addition to her parents, she was preceded in death by her husband, Harold Flinsch; son-in-law, Weems Oliver Baskin, III; grandson, Mark Tatum Bonaca and was so very excited to be reunited with them and many other loved ones in heaven. The memorial service for Mrs. Flinsch will be held at 11 o’clock, Friday, January 28th at St. Michael’s Lutheran Church, 400 River Rd, Columbia, SC 29212 with Pastor Frank W. Anderson officiating. Shives Funeral Home, Trenholm Road Chapel, is assisting the family. Memorials may be sent to St. Michael’s Lutheran Church.

Elizabeth Tatum Flinsch, 97, fondly known as &#8220;Betty&#8221; went to be with her Heavenly Father on January 20th, 2022. Born April 7, 1924 in Tatum, SC, she was the daughter of the late John and Elizabeth Croom Tatum. She enjoyed her small-town... View Obituary & Service Information

The family of Mrs. Elizabeth Tatum Flinsch created this Life Tributes page to make it easy to share your memories.

Send flowers to the Flinsch family.