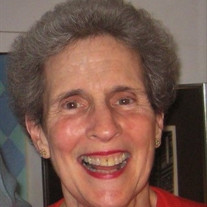 Elizabeth Ladson Mills McKay “Betsy” of Columbia, SC died July 21, 2020 at the age of 82. Betsy was the daughter of the late Ladson A. Mills and Betty T. Mills, born in Washington, DC, September 11, 1937. Betsy moved to Columbia to attend the University of South Carolina where she graduated with a degree in journalism in 1960. She married her husband, Julius W. McKay “Jay” in 1963. Betsy raised her two children while also being extremely involved in the community. She was active in The Junior League of Columbia (President 1972). South Carolina Governor's Mansion Commission from 1986-95 (Chairman 1993-95). SC Governor's Mansion Foundation (Chairman 1984-85). Served on the Friends of Belle W. Baruch Institute for Marine Biology Board (1988-98), United Way of SC (Chairman), United Way of the Midlands, (Executive Committee), Providence Hospital Foundation Board (1990-1996), Sisters of Charity Foundation of South Carolina Board 1996-2001 (Vice-Chair, 1996). Colonial Dames. She was a member of Trinity Cathedral, serving on the vestry as Senior Warden, active Altar Guild member, reading at Hyatt Park Elementary School, fixing lunch packs at W.A. Perry and supporting the Pickle Pantry for the annual Trinity Bazaar. She adored being a part of The Thursday Study Club, The New Century Club, and The Wistaria Garden Club. Betsy loved being in Little Switzerland, NC, where she and Jay had a summer cottage that was often filled with family and guests. She kept a beautiful garden there and was actively involved at the Church of the Resurrection. She loved to hike in the mountains and was great at identifying the various birds she and others encountered. She loved teaching her children and grandchildren about the birds, plants, and constellations. She would rise early in the morning to catch a sunrise while hiking into the woods with a bucket around her neck to pick wild blackberries and come home to turn them into jam. She would stop anything for a brilliant sunset. She was a confirmed “Lunatic,” calling her children across the country to go outside and see the beautiful moon. She was a 5:30am regular at the StrongHold Gym, working out and lifting weights to the end. She was selfless with her time and was a good friend to many (and to Minnie, for that matter!) She was relentlessly positive, bringing a bright smile and joy wherever she went. Last year, after Betsy gave up her driver’s license, she was often seen walking to and from her home to the grocery store, Talbots, and the Farmer’s Market on Beltine. Many thanks to her friends, old and new, who gave her rides when they saw her strolling towards home with bags in her hands. She was predeceased by her husband Julius W. McKay "Jay" and her sister, Joyce Sumwalt. She is survived by her brother, Ladson A. Mills (Tina); her children, J. Walker McKay, Jr (Sally) and Elizabeth M. Moosbrugger (John); her grandchildren, John Walker Moosbrugger, S. Mills Moosbrugger, J. Walker McKay, III, and James Mitchell McKay. She leaves behind a significant stock of raspberry jam, strawberry jam, mango chutney, artichoke relish and other preserves. Special thanks to her caregivers Ray Sanders, Lillie Watson, and Michele Williams who have become like family to us. Also, thanks to Debbie Boyer for her steadfast friendship and for keeping mom so healthy over the years. A private service and burial will be held at Trinity Episcopal Cathedral. The live stream will be available at 10:30 o'clock on Friday, July 24th by visiting https://vimeo.com/440647777/1ebe78f844. Shives Funeral Home, Trenholm Road Chapel, is assisting the family. In lieu of flowers, memorials may be made to The Trinity Foundation, 1100 Sumter Street, Columbia, SC 29201 or Homeless No More, 2711 Middleburg Drive, Suite 213, Columbia, SC 29204.

The family of Mrs. Elizabeth Mills McKay created this Life Tributes page to make it easy to share your memories.

Send flowers to the McKay family.