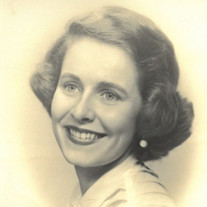 Elizabeth Hemstreet Snipes, 90, of Columbia, passed away on Sunday, November 14, 2021. Born on March 12, 1931, in Orange, New Jersey, she was the daughter of Verne Verbeck and Georgia Koch Hemstreet. Elizabeth was a dedicated member of Forest Lake Presbyterian since the early 1960s. Elizabeth received her bachelor’s degree in 1952 from the University of Maryland and was a member of Kappa Delta Sorority. Shortly thereafter, she began working as a paralegal on K Street in Washington, DC. She also worked for the South Carolina Board of Architectural Examiners. Prior to retirement, she was employed as a software consultant for McCain Financial Group. She was the loving wife of 47 years to George Jackson Snipes, after the two met during spring break in Daytona Beach on a blind date. Ms. Snipes had a love for art, sewing, golfing, and gardening. Although, her greatest passion in life was her family, she had a quiet intelligence, straightforward manner, and an insatiable curiosity. She devoted herself to being a wonderful wife and mother for her family. Her loved ones remember her as being a kind with a generous heart. Survivors include son, George Jackson Snipes Jr. (LuAnn Thompson-Snipes); daughter, Catherine Snipes Hyman (Steve W.); grandchildren, William Andrew Hyman (Rosalinda) and Chelsea A. Snipes (Chris Sylvester); sister-in-law, Jane Hemstreet. In addition to her parents and husband, she is preceded in death by her brother, Russell Hemstreet. The funeral service for Ms. Snipes will be held at 2:30 pm in the afternoon on Saturday, November 20th, at Elmwood Cemetery, 501 Elmwood Ave, Columbia, SC 29201. The family will receive friends following the graveside service at the Snipes’ residence. Shives Funeral Home, Trenholm Road Chapel is assisting the family. In lieu of flowers, memorials may be made to Habitat for Humanity, 209 South Sumter Street Columbia, SC 29201.

Elizabeth Hemstreet Snipes, 90, of Columbia, passed away on Sunday, November 14, 2021. Born on March 12, 1931, in Orange, New Jersey, she was the daughter of Verne Verbeck and Georgia Koch Hemstreet. Elizabeth was a dedicated member of Forest... View Obituary & Service Information

The family of Ms. Elizabeth Ann Hemstreet Snipes created this Life Tributes page to make it easy to share your memories.

Elizabeth Hemstreet Snipes, 90, of Columbia, passed away on Sunday,...

Send flowers to the Snipes family.