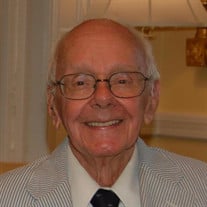 Frank Efird Kinard, husband of Mary Angelyn, died at his home at Still Hopes Episcopal Retirement Community on May 1, 2021. A memorial service will be held at Trinity Episcopal Cathedral on Saturday, May 15 at 10am. Livestream of the service will also be available. Following the memorial service, a reception will be held at the Robert Mills Carriage House. Frank was born on January 15, 1924, in Newberry, S.C., the younger son of Dr. James C. and Katherine Efird Kinard. He enrolled at Newberry College in 1941 and, like many of his classmates, enlisted in the military and was called to active duty in the Army Air Corps in early 1943. He served three years then returned to Newberry College, graduating in 1947 after which he enrolled at the University of North Carolina at Chapel Hill for graduate study in physics. It was at Chapel Hill that he met his future bride, Mary Angelyn McNease, an undergraduate at UNC. They were married in 1952 and celebrated their 65th wedding anniversary on July 25, 2017 with a reception for family at friends at Still Hopes. After he completed his doctorate at UNC, the young couple moved to Aiken, S.C. where Frank had accepted a job as research physicist at the Savannah River Laboratory, then operated by E. I. DuPont de Nemours, working first in radiation detector development and then in neutron reactor physics. In 1967, the state created a coordinating board for its public colleges and universities, the S.C. Commission on Higher Education. The Commission invited Dr. Kinard to be its first Executive Director, a challenge he accepted. He continued to serve that agency for 23 years, retiring as Associate Commissioner for Academic Affairs. He was awarded the Order of the Palmetto in 1990 by Governor Campbell. He was a member of Forest Lake Club and of Trinity Cathedral where he served for more than 40 years as an usher and in retirement became the Cathedral's unofficial photographer for a number of years. Frank was preceded in death by his brother, James E. Kinard, and his son, James McNease Kinard. He is survived by his wife Mary McNease Kinard; his daughters, Sally Kinard Bayless (Charles) and Anne D. Kinard; and his grandchildren Price Bayless, Sarah Bayless, and Garner Bayless. In lieu of flowers, memorials may be sent to Newberry College (2100 College Street, Newberry, S.C. 29108); the Department of Physics and Astronomy at UNC-Chapel Hill (P. O. Box 309, Chapel Hill, N.C. 27514); or a charity of choice.

Frank Efird Kinard, husband of Mary Angelyn, died at his home at Still Hopes Episcopal Retirement Community on May 1, 2021. A memorial service will be held at Trinity Episcopal Cathedral on Saturday, May 15 at 10am. Livestream of the service... View Obituary & Service Information