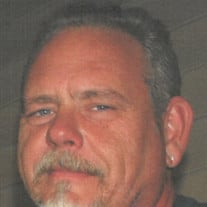 Gary Howell Crawford, 53, of Hopkins, passed away Friday, July 30,2021 at Lexington Medical Hospital, in West Columbia, South Carolina. He was born on May 8, 1968 at Christ Hospital in Cincinnati, Ohio. Gary was baptized by Piney Grove AME Church and lived with an awareness of the Father’s and Son’s presence. He graduated from Spring Valley High School in 1987 and went on to attend Midlands Technical College. His father, Chaplain Rufus Judson Crawford, gave Gary work ethic. Gary’s first job was at Little Pigs Barbecue before going to work at Midlands Center in 1990. He worked as a loan officer and later went on to work security for Richland Hospital and as a tech for Richland Springs Psychiatric Hospital. In 1996, Gary started working for UPS and became part of the Teamsters Union. He remained with UPS until his death. Survivors include his daughters; Katie Nicole, and Jodie Noel Crawford; his mother, Wilma Sue Crawford; sister and brother-in-law, Donna Rae Crawford and Eddie John Josey; nephew, Gabriel Van Alexander Crawford; and niece, Emma Elizabeth Josey. He was preceded in death by his father. A memorial service for Gary will be held 6 o’clock, Saturday, August 14, 2021, at Shives Funeral Home, Trenholm Road Chapel with Chaplain Yu Fong Chong officiating. The family will greet friends prior to the service beginning at 5 o’clock. A livestream may be viewed by visiting his tribute page at ShivesFuneralHome.com. In lieu of flowers, memorial may be made to the Special Olympics,109 Oak Park Dr., Irmo, South Carolina, 29063.

The family of Mr. Gary H Crawford created this Life Tributes page to make it easy to share your memories.

Send flowers to the Crawford family.