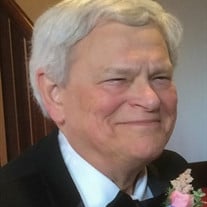 Gary Robert Daves, 75, passed away peacefully at home following a brief illness and surrounded by his devoted wife and family. Born April 14, 1945, in Dillon, SC, he was the son of Georgia Ellen Shytle and John Robert Daves. Gary graduated from Wofford College in 1967 with a degree in economics and business administration. He was a member of Kappa Sigma Fraternity. He participated in the ROTC program and received his commission as an officer in the U.S. Army. Service to his country was deferred so he could attend law school. He graduated from the University of South Carolina School of Law in 1970. Shortly after marrying the love of his life, Sara Bea Johnson, Gary began his tour of duty in Da Nang, Vietnam. He received the Army Commendation Medal and Bronze Star Medal and attained the rank of Captain. A faithful and active member of Shandon United Methodist Church, Gary was guided by his unwavering love of the Lord. He missed attending services in person during Covid but was present online every Sunday and for Bible study during the week, with Bea by his side and sometimes his grandson popping up in the background. At Shandon, Gary was a member of the J.O.Y. Sunday school class and Sons of Thunder, the men’s ministry. He served on the Board of Trustees, Administrative Board, Adult Council, and Long-Range Planning Committee and as First Sunday Usher Team Captain. During his legal career, he was a partner at Woodward, Leventis, Unger, Daves, Herndon & Cothran and Nelson Mullins Riley & Scarborough. In recent years, he had his own practice on Main Street across from the courthouse. Real estate agents throughout Columbia will fondly remember his care and professionalism in closings, as he helped clients complete the process of buying their first home or selling a beloved family home. Gary enjoyed practicing law, though his favorite job was as a father to Chris and Walker. He was seen cheering at almost every sporting event – and his athletic boys had many. Watching them grow up and celebrating their marriages in recent years kept a permanent smile in his heart. His heart grew even bigger (who knew it could?!) with the birth of his grandson, Rhett, in 2018. As his family recently discovered, Gary printed out every photo they emailed him and adorned them with comments like his own personal Facebook. At the beach this summer, Rhett always picked “Granddaddio” to put him to bed, because Granddaddio was the one who’d keep reading him books for an hour, or two. Gary was known for his kindness, integrity, and servant’s heart. Earlier in life, he was also known for his high stepping skills as the drum major for the Dillon High School band, which he led in the Orange Bowl Parade. An avid birder, he kept his backyard friends happy with overflowing bird feeders and enjoyed teaching Rhett how to identify all the colorful species that came for meals. Community service was central to Gary’s life from a young age. He was an Eagle Scout, as were his sons, and he served as cubmaster and scoutmaster to their troops. He was a longtime member and past president and board chairman of the Columbia Sertoma Club, with whom he worked tirelessly to support Carolina Children’s Home, receiving the Service to Mankind Award. For 40 years, he volunteered as a house manager at Town Theatre. Bea and Gary marked their 50th wedding anniversary last Saturday with a brief hospital visit, where they talked about how blessed they were to build a life together. On the phone later that night, with their children eavesdropping, they spoke of love and gratitude and their trust in the Lord. Gary is survived by his wife, Bea; sons, William Christopher Daves (Elizabeth Wolfe) and Gary Walker Daves (Jill Armbruster) of Columbia; grandson, Rhett Wolfe Daves; brother, Ronald Dean Daves (Paula Eargle) of Columbia and Trade, Tenn.; brother-in-law, Weldon Johnson (Elaine), and sister-in-law, English Folsom (Johnny); and numerous nieces and nephews. He was predeceased by his parents and younger brother, John Blake Daves. Due to COVID-19 restrictions, The Reverend Smoke Kanipe will officiate a service for family only at Shandon United Methodist Church on Wednesday, February 10, at 2 p.m. A livestream may be viewed by visiting his tribute page at ShivesFuneralHome.com. Memorials may be made to Shandon United Methodist Church, 3407 Devine Street, Columbia, SC 29205, or the charity of one’s choice.

Gary Robert Daves, 75, passed away peacefully at home following a brief illness and surrounded by his devoted wife and family. Born April 14, 1945, in Dillon, SC, he was the son of Georgia Ellen Shytle and John Robert Daves. Gary graduated... View Obituary & Service Information

The family of Mr. Gary Robert Daves created this Life Tributes page to make it easy to share your memories.

Send flowers to the Daves family.