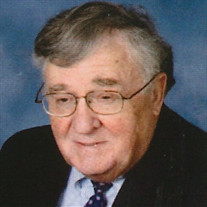 Gilbert Tennent “Sonny” Powers, Jr. Columbia- Gilbert Tennent “Sonny” Powers, Jr. died early Friday morning at Prisma Health Baptist Hospital after a brief battle with COVID-19. Son of the late Gilbert Tennent Powers, Sr. and Sarah Odom Powers, Sonny was born November 29, 1933 in Columbia, SC. He is survived by his loving wife, Elizabeth Verner Powers, four children, Gilbert Tennent Powers III (Christine), Elizabeth Weston Powers Harmon (Mark), William Duffie Verner Powers, Sarah Preston Powers Marzagao (Marwan), four grandchildren, Sarah Tennent “Sally” Marzagao, Mary Duffie Marzagao, William Powers Marzagao, Elizabeth Verner “Evie” Harmon, and scores of extended family and dear friends. After graduating from Dreher High School in 1951, Sonny attended Clemson Agricultural and Mechanical College (Clemson University), during which time he served in the United States Army. While stationed throughout various locations in Germany from 1956-1957, Sonny served as a shortwave radio operator in the border patrol of the Third Battalion, 14th Armored Calvary Regiment. He returned to his native Columbia after his time at Clemson and in the Army and remained a bachelor until meeting Elizabeth Weston Verner. After two years of courtship, Sonny and Elizabeth (whom he affectionately called “Fox” for her slyness) were married at St. John’s Episcopal Church in Congaree, SC on May 7, 1966. Several years later he established G.T. Powers, Jr. and Associates and was active in the SC Association of Life Underwriters. He was an insurance and estate planning veteran and remained active in his business until his death. Beyond his family and successful career, Sonny’s passion was serving others. He was an avid and dedicated member of North Lake Sertoma Club, holding several positions of leadership throughout more than 40 years of membership. His pride and joy within the Sertoma organization was Camp Sertoma, where he served as a board member for four decades. As co-chair of numerous significant fundraising efforts to improve the Camp Sertoma experience, Sonny spearheaded Project 76, through which Camp Sertoma was founded; Project Splash, which funded the construction of an Olympic size swimming pool with special needs capabilities; and Project Launch A Shooting Star, which established the Camp Sertoma Endowment Fund. A member of Trinity Episcopal Cathedral, Sonny was a man of strong faith and instilled its importance upon his children. He enjoyed being social and was a member of the Cotillion Club,The Quadrille, St. Andrews Society of Columbia, IPTAY, Old Men’s Lunch Club, the Thursday Morning Prayer Group and Forest Lake Club where his enthusiasm for tennis (as well as his peculiar service toss, short fuse and keen eyesight) was legendary on the courts. He enjoyed going out to eat and even more so when joined by friends. Another of Sonny’s great passions was following all types of sports, none more so than his beloved Clemson Tigers football team. Sonny liked his food hot and his beverages cold, especially Old Fashioneds where he bypassed the muddling fruit and opted instead for using orange juice and cherry juice. He loved beach music and “60 Minute Man” always called him to the dance floor to shag with Fox. The beach brought great joy to Sonny and family vacations each summer were most memorable, especially his deep affection for Mrs. Ruth Smalls who cooked for the family and in her later years would come to just visit. Extended family and friends were always welcome but had better not be late for dinner. The Reverend Canon Patricia C. Malanuk will officiate a service for the immediate family. Sonny’s ashes will rest at St. John’s Episcopal Church in Congaree, SC where he and his bride married 54 years ago. He made it known that upon his death, instead of tears, a party would be thrown to celebrate his life. This celebration will be announced when family and friends are able to come together without the threat of COVID-19. Shives Funeral Home, Trenholm Road Chapel, is assisting the family. In lieu of flowers, memorial contributions may be made to Camp Sertoma of SC, c/o Dale Treash, PO Box 1808, Anderson, SC 29622 or a charity of one’s choice. Condolences for the family may be offered online at ShivesFuneralHome.com or by correspondence, 913 Rickenbaker Road, Columbia, SC 29205.

The family of Mr. Gilbert T. "Sonny" Powers, Jr. created this Life Tributes page to make it easy to share your memories.

Send flowers to the Powers family.