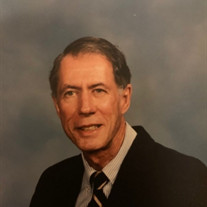 Glen E. Craig, 89, died in Columbia, on Thursday, January 14, 2021. The graveside service for Mr. Craig will be held private with immediate family only in the First Presbyterian Churchyard. Mr. Craig was born in Columbia, and the son of Robert Eli and Sara S. Craig. He attended the Columbia public schools. He graduated from Georgia Military Academy and the University of South Carolina. Subsequently, and during the Korean War, he enlisted in the United States Air Force; was commissioned a Second Lieutenant; and was stationed in Texas, Wyoming, and Germany. Thereafter, he graduated from the University of South Carolina School of Law. Upon his admission to the practice of law, he was associated with a Columbia law firm engaged in the general civil practice of law. Thereafter, he was Attorney and Assistant to the Vice President of the Federal Intermediate Credit Bank of Columbia; general Counsel of the South Carolina Department of Insurance; and an Assistant United States Attorney, Department of Justice. He was admitted to practice before state and federal courts. Mr. Craig was a member of the South Carolina Bar and the American and Richland County Bar Associations. He was a member and ordained deacon of the First Presbyterian Church in Columbia. He was a member and past president of the Columbia Golden K. Kiwanis Club, and also a member of Forest Lake Club. Mr. Craig was a beloved son, husband and father. He is survived by his son, Glen E. Craig, Jr. and his wife, Liz, of Denver, NC; his daughter, Jeanne M. Craig, of Walhalla, SC; grandsons, David E. Craig, and his wife, Anna, Daniel E. Craig; and great-granddaughter, Caroline Craig. In addition to his parents, he is preceded in death by his wife, Jeanne S. Craig; and sister Sara Frances Craig. Memorials may be made to First Presbyterian Church, 1324 Marion Street, Columbia, SC 29201; or to the charity of one’s choice.

Glen E. Craig, 89, died in Columbia, on Thursday, January 14, 2021. The graveside service for Mr. Craig will be held private with immediate family only in the First Presbyterian Churchyard. Mr. Craig was born in Columbia, and the son of... View Obituary & Service Information

The family of Mr. Glen Eli Craig, Sr. created this Life Tributes page to make it easy to share your memories.

Send flowers to the Craig family.