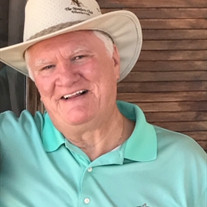 Having no further need of his earthly body, Glenn Arnold King entered into heaven on May 11, 2021. Born in Sumter, SC, on December 14, 1950 to the late J. Willard and Frances Baker King, Glenn was a lifelong resident of Columbia, SC. He was predeceased by his first wife, Gayle Cantey King, and is survived by his loving wife, Cecile Sanderson King; daughter, Stacey King Howell (Adam) of Charlotte, NC; grandchildren, Cally, Jones, and Wright; step-son Jason Gough (Kristen) of Myrtle Beach, SC; and brother, C. Leon King (Angeline) of Sumter, more recently of Columbus, OH. Glenn was a 1969 graduate of Edmunds High School in Sumter, SC, and a 1974 graduate of the University of South Carolina. He was retired from the SC Budget and Control Board, Retirement Division, as well as the SC Air National Guard. He remained active in the National Guard retiree group long after completing his service to his nation. Glenn was a lifelong member and deacon of First Presbyterian Church in Columbia, where he was blessed with many dear friendships. He also spent more than 25 years coaching youth sports in the Irmo area, where he touched the lives of hundreds of young baseball players. Glenn never went out to dinner or to a ballgame without hearing “Hey! Coach King!” from a former ball player who wanted to shake his hand. Believing strongly in his responsibility to serve his community, Glenn was also a longtime volunteer for Special Olympics of SC, and past president of the Dutch Fork Civitan Club, where he was formerly recognized as Civitan of the Year. He also served as PTO president and booster club board member at Dutch Fork High School. Glenn always considered himself to be a wealthy man, because of the wealth of friends and family he had during his life. He loved his grandchildren, his family, his church, his Gamecocks, and playing golf at the Wildewood Club. The service for Glenn will be held at 11 o’clock, Friday, May 14th, at First Presbyterian Church, 1401 Marion Street, Columbia, SC, with Rev. David H. Lauten officiating. A visitation will follow the service in Jackson Hall. Burial in Bush River Memorial Gardens with military honors will conclude the service and visitation. Shives Funeral Home, Trenholm Road Chapel, is assisting the family. A livestream of the service may be seen by visiting https://www.firstprescolumbia.org/live In lieu of flowers, memorials can be sent to Special Olympics, SC, 109 Oak Park Drive, Irmo, SC 29063, (803) 772-1555

Having no further need of his earthly body, Glenn Arnold King entered into heaven on May 11, 2021. Born in Sumter, SC, on December 14, 1950 to the late J. Willard and Frances Baker King, Glenn was a lifelong resident of Columbia, SC. He was... View Obituary & Service Information

The family of Mr. Glenn Arnold King created this Life Tributes page to make it easy to share your memories.

Having no further need of his earthly body, Glenn Arnold King...

Send flowers to the King family.