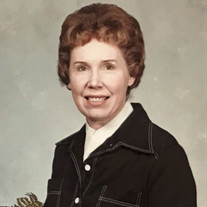 Gloria Jean Hollister died peacefully on September 28. She was 91 years of age. She was born Gloria Jean Rippey on September 13, 1930, in Orlinda, TN to Henry Hatton and Virginia (Harper) Rippey. Known to her immediate family as Jean, she spent her early years with her large extended family in rural Tennessee. Due to her father’s ill health and the promise of education and employment, she left home in 1946 to live in Cleveland, OH with her aunt and uncle. While working at the Lewis Flight Propulsion Laboratory in Cleveland, she met and later married her husband of 64 years, Donald Paul Hollister. After marriage in 1954, they moved to Akron, OH to start a family, welcoming the birth of their two sons. In 1962 they moved to Asheville, NC where they welcomed their third child, a daughter, in 1965. While in Asheville, they were founding members Berean Gospel Church and later served as active members of Temple Baptist Church. She worked for Sears in Asheville, where she retired after 24 years. After living and serving in the Asheville area for nearly 50 years, they moved to Columbia, SC in 2010 to be closer to their daughter and two grandsons. She enjoyed the community of Northeast Presbyterian Church, particularly the Julia Vanderpool Quilters. Following the death of her husband in 2019, she continued to live independently until recent months. Gloria is survived by her two sons, David (Sherry) of Snellville, GA, and Daniel (Tam) of Washington, DC; her daughter, Donna Lehman (Jim) of Columbia; two grandsons, Alex and Bradley, both of Columbia; her sister, Margaret Parker of Indianapolis, IN; a sister-in-law, Mary Beth Sargent of Nashville; as well as nieces and nephews. She was preceded in death by her husband, Don; her brother, Henry of Akron; and a brother, Robert of Indianapolis. Gloria’s faith in God was reflected in all that she did. She will be greatly missed by her family and those who knew her. She always became a caring friend to anyone she met and will be remembered by them for her loving kindness and sweet spirit. In lieu of flowers, memorial gifts can be made to Northeast Presbyterian Church Benevolence Fund in Columbia, SC and the Temple Baptist Church Missions Fund in Asheville, NC. The family would especially like to thank the many caregivers of Wildewood Downs Skilled Nursing for their compassionate care offered to Gloria and the family during her final months. The graveside service for Mrs. Hollister will be at 1 o’clock on Thursday, September 30th, at Fort Jackson National Cemetery, 4170 Percival Road, Columbia, SC 29229. Shives Funeral Home, Trenholm Road Chapel, is assisting the family.

Gloria Jean Hollister died peacefully on September 28. She was 91 years of age. She was born Gloria Jean Rippey on September 13, 1930, in Orlinda, TN to Henry Hatton and Virginia (Harper) Rippey. Known to her immediate family as Jean, she... View Obituary & Service Information

The family of Mrs. Gloria Jean Hollister created this Life Tributes page to make it easy to share your memories.

Gloria Jean Hollister died peacefully on September 28. She was...

Send flowers to the Hollister family.