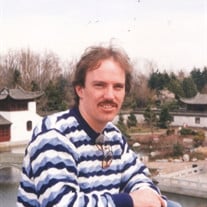 Gordon was born to Alan and Edith (Allaire) Avery on February 28, 1963 in Oklahoma City, Ok. He passed away peacefully on March 7th, 2021 in Columbia, SC. Gordon grew up in rural Virginia outside of Richmond. He moved to Marshalltown, Iowa his last year of high school. He graduated from the University of Iowa in 1985 with a degree in Political Science. He married his sweetheart Deborah Leigh (Forinash) Avery in 1985. They moved to Washington DC where he worked for Vinson & Elkins. Being of a very entrepreneurial and independent mind, they relocated to Columbia, SC where he started his own business, MicroPrice Inc. They settled down with the arrival of their two children, Scott and Robin. In 1995 Gordon met the true love of his life, Chérie (Gaskins) Avery. They blended their lives together, adding his wonderful stepdaughter, Celeste (Morris) Mills to his family. Gordon eventually made his way into real estate. He has owned Lucky Ranch Properties in Chapin where he established his property management company, Equity Real Estate Services. In 2013, he was surprised by joy with the arrival of his daughter Lily. He was a beloved father, son, brother and friend. He was a self-learned guitarist and avid Rolling Stones fan. He shared his love for music with everyone. He had a quick wit and a knack for goofy names for loved ones. Gordon is preceded in death by his father, The Reverend Alan Avery, sister, Anne Kathryn (Avery) Harlin, and grandparents Ella and Charles Allaire, Phoebe Jane and Gordon Stevens Avery I. He leaves behind his beloved children: Scott, Robin, Celeste and Lily. His mother, Edith and two sisters; Seeley Holmquist and Sarah Downs and his first wife Deborah, and his true love, his rock and foundation Chérie. Due foreseeable health and safety restrictions a celebration of life will be held later this spring. Memorials may be made in lieu of flowers to the Riverbanks Zoo and Garden. 500 Wildlife Pkwy, Columbia, SC 29210-8014. https://society.riverbanks.org/donate/honorary-memorial-gifts,

Gordon was born to Alan and Edith (Allaire) Avery on February 28, 1963 in Oklahoma City, Ok. He passed away peacefully on March 7th, 2021 in Columbia, SC. Gordon grew up in rural Virginia outside of Richmond. He moved to Marshalltown, Iowa... View Obituary & Service Information

The family of Mr. Gordon Stevens Avery, II created this Life Tributes page to make it easy to share your memories.

Gordon was born to Alan and Edith (Allaire) Avery on February...

Send flowers to the Avery family.