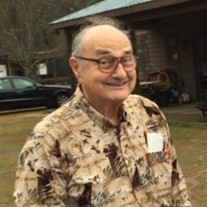 Guerry Odell Frick, 88, of Gaston, SC, died at home Sunday, October 3, 2021, while being cared for by his son, Guerry and his wife, Paddi, which he always referred to as his, “Daughter-in-Love.” Born September 23, 1933, in Columbia, SC, he was a son of the late Silas Frick, Sr. and Lenora Broome Frick. Mr. Frick honorably served his country in the Air National Guard, where he was called to active duty for a year. He was a man of great faith and Godly character. Mr. Frick enjoyed cooking and buying any cooking gadget available. He was a prankster, fun loving, and will be greatly missed by everyone who had the pleasure of being his friend. Mr. Frick’s greatest joy was spending time with his entire family. Survivors include his children, Guerry Frick (Paddi) of Ridgeway and Cindy Setlock (Rick) of Columbia; grandchildren, Wendy Cope of Los Alamitos, CA, Daryn Crosby (Marcy) of Pittsburgh, PA, and Tiffany Rothermel of Pittsburgh, PA; as well as his great grandchildren, Alysia Cope, Ethan Cope, Jaedyn Cope, Nolan Rothermel, Macianna Rothermel, Ashton Rothermel, and Daxton Crosby; as well as his fur baby of 14 years, “Precious”, who will now live out her life with Guerry and Paddi Frick. In addition to his parents, he was preceded in death by his wife, Frances L. Frick; brothers, Silas Frick, Jr. and Talmage Frick, Sr. The family would like to extend their special gratitude to April Montgomery and the entire staff of Heart of Hospice of South Carolina. The graveside service for Mr. Frick will be held at 3 o’clock, Sunday, October 10th, at Pine Grove Cemetery, 284 Pine Grove Road, Blythewood, SC. Shives Funeral Home, Trenholm Road Chapel, is assisting the family. In lieu of flowers, memorials may be made to any animal shelter or rescue organization of your choice. A livestream of the graveside service is available at ShivesFuneralHome.com.

The family of Mr. Guerry Odell Frick created this Life Tributes page to make it easy to share your memories.