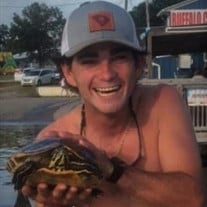 Harlon Walter “Turtle Man” Drew, 25, of Elgin, SC, died Friday, September 3, 2021. Born February 26, 1996, in Columbia, he is the son of Harlon Michael Drew and the late Sonya Oddie Drew. Harlon lived life to the fullest every day. He was always the life of the party and could brighten any room with his presence. Harlon loved spending time with his family and his friends. No matter the occasion, Harlon could find a way to make it the best day ever. He had a passion for being outdoors and was most at home in the water. He was a Clemson Football fanatic, avid fisherman, and loved shooting guns. Harlon had a great appreciation for animals, especially his dog, Chance. His greatest passion; however, was being a father. Harlon’s devotion and connection to his son was undeniable. He cherished every moment spent with his little boy! Surviving is his father, Harlon Michael Drew; wife, Bessie Ann-Maria Drew; son, Harlon Waylan Drew; brother, Chet Nelson Lynch (Baylee); maternal grandmother, Terri Jo Oddie; paternal grandfather, Harlon Whitney Drew, III; sister-in-law, Misty Coker (CJ); nephew Easton Coker; as well as a multitude of aunts, uncles, cousins, and friends who loved him dearly. In addition to his mother, he was preceded in death by his grandfathers, Walter Oddie and Stephen Hunt and his paternal grandmother, Gloria Carmen Hunt. The funeral service for Harlon will be held at 7 o’clock Wednesday, September 8th at Shives Funeral Home, Trenholm Road Chapel, 7600 Trenholm Road Ext., Columbia, SC. The family will receive friends at the funeral home prior to the service beginning at 5 o’clock. In lieu of flowers, memorial may be sent to St. Jude Children’s Research Hospital, 262 Danny Thomas Place, Memphis, TN 38105.

The family of Mr. Harlon Walter "Turtle Man" Drew created this Life Tributes page to make it easy to share your memories.

Send flowers to the Drew family.